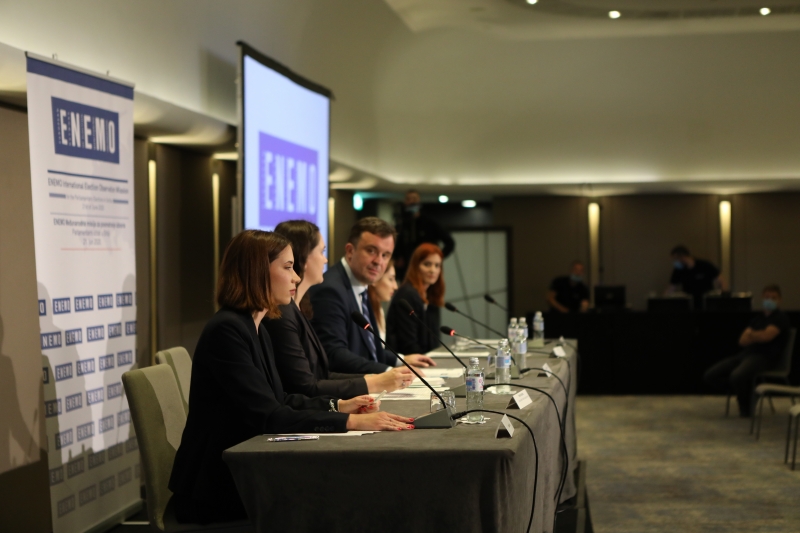 Belgrade, 22. June 2020 - The June 21st parliamentary elections were efficiently managed and fundamental freedoms were generally respected. However, the competitiveness of these elections were considerably damaged by partial boycott, campaigning limitations due to the COVID 19 pandemic, blurring of lines between State and the ruling parties, changes to the electoral law just before elections, and widespread pressure on independent media. These are the main conclusions of Preliminary Statement of ENEMO, which was presented at the press conference.

In response to a question posed by media, Head of the Mission Zlatko Vujovic said that beside the boycott, the competitiveness of these elections was also damaged by campaigning limitations due to the COVID 19 pandemic, blurring of lines between State and the ruling parties, changes to the electoral law just before elections, and widespread pressure on independent media. He explained that despite all these reasons that affected the competitiveness of the elections, there is no doubt that elections were legitimate.

“There is no international standard that will determine how much turnout is enough to define any elections as legitimate. Of course, it is better when the turnout is higher and voters are much more involved in the electoral process. But there is a lot of democracies where the turnout is very low, and that doesn’t mean that there is no democracy. In this case, we have already said that the boycott affected the competitiveness of the elections, but no one can say that the elections are not legitimate,” said Vujovic.

Deputy Head of the Mission/ Campaign Finance Analyst Cornelia Calin pointed out that changes to the electoral law, especially of important elements of the electoral system were made too close to the day of voting, which may have led to confusion or misinterpretation of the law.

“The new amendments in Serbia’s electoral laws were introduced in February, and the latest in May 2020, the month before the day of voting. Those changes were not made in accordance with recommendations from Venice Commission’s Code of Good practice in Electoral Matters, in respect to changing electoral laws not less than one year before elections,” said Calin.

Election Expert – Electoral Campaign Analyst Kristina Kostelac said that although the campaign was mostly competitive, ENEMO observed that the unequal media coverage, misuse of administrative resources and functionary campaigning blurred the lines between the state and the ruling party.

“The Covid-19 pandemic and functionary campaigning led to an atypical domination of the ruling party during both the pre-campaign and campaign periods. Functionary campaigning of the SNS leader and the incumbent President resulted in an uneven level playing field, giving SNS an advantage in terms of media coverage and social media presence,” said Kostelac.

This Preliminary Statement is based on ENEMO’s findings from the pre-election period and Election Day. The Mission will stay in the country until the conclusion of the electoral process to follow post-election developments.

A final report, including a full assessment, which will depend in part on the conduct of the remaining stages of the elections, detailed findings, and recommendations, will be issued within sixty days from the certification of results.

The complete statement of preliminary findings and conclusions ENEMO is available here: