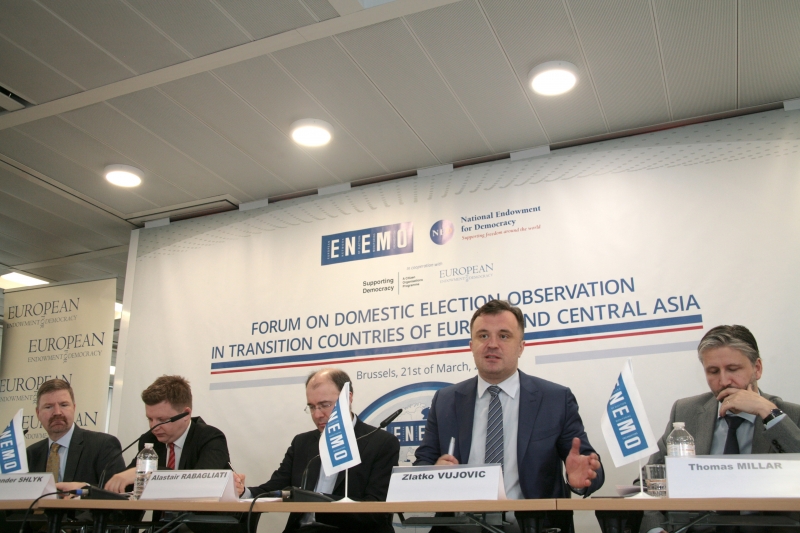 Brussels,  21 March 2018 - Stronger and more accessible support of the European Union (EU) is a key precondition for improving sustainability of domestic election monitoring bf CSOs, was concluded on the Forum on Domestic Election Observation in Transition Countries of Europe and Central Asia.

ENEMO offered to the EU three possible scenarios for a debate, which could be even combined.

Executive Director of EED, Jerzy Pomianowski, said that for organizations that support democracy, the election observation is type of activity that are present into community that are most structured, most developed and has very long record of great methodologies and systematized approach.

„This is of extreme importance, because at the same time we are aware that democracy isn’t just about elections. There are other aspects that need to be clearly addressed“, said Pomianowski.

He also said that European Endowment for Democracy also focused on people activism.

„Monitoring elections is one of those activities that mobilize really great crowds. This makes this specific activity much more meaningful, because it provides opportunity for many people to volunteer, see things in different locations and to engage people massively “, said Pomianowski.

He underlined that the European Endowment for Democracy was providing grants for civic activists, political activists, independent media etc., which could be considered as huge range of democracy initiatives.

„We are not global, we are still regional. We operate in North and Middle East, Eastern partnership countries, Russia and Turkey. Since December last yea, we are also present in the Western Balkan countries“, explained Pomianowski.

Secretary General of European Network of Election Monitoring Organizations (ENEMO), Zlatko Vujović, explained that the idea was to attract the attention of decision makers in Brussels, regarding the stability of domestic election observation.

„This really is a problem throughout the region.  Some countries may be in better situation, some may not, but the case is that many organizations barely survive due to the problem with funding.  For some countries this is a security issue“, said Vujović.

He considered that withdrawal of US funding in many countries was creating even bigger problem for sustainability.

„In ENEMO, we believe that attracting more attention of the EU would be a good contribution. It does not mean that the support is missing, but that sometimes inefficient mechanisms and slow procedures are really problematic in the sense of election monitoring“, explained Vujović.

„ EU has three basic criteria for taking part in election observations.  The first is that we see the chance of a credible election process taking place. If credible election process is not likely, then we refrain from running the elections. For example, this year we decided not to run for elections in Cambodia since credible outcome was not likely.  The Second criterion is that we receive an invitation.  We see no purpose in going if we are not invited. The third criterion is whether we think we can make a difference or not,“ Martin specified.

He explained that while he was a chief observer, his approach was that he didn’t care who won, but how they won.

Head of Unit Serbia, Acting Director Western Balkans, DG NEAR, European Commission, Catherine Wendt said that the elections were corner stone to the stability of any democratic institution.

„We adopted the Strategy on Western Balkans which was the key moment for taking our strategy on this region. We tried to focus on the importance of reform in law, as the countries come closer to the EU. We will present the situation in each country in our Annual report“, Wendt said.

She explained that without revealing what they said about each country, they could say that they had identified progress over the years in establishing democratic norms and institutions.

„There were some concerns during the recent elections, identified by international and domestic observers.  They include the lack of confidence, impartiality and independence of the election management bodies; the abuse and pressure on voters, lack of access on media, as well as lack of freedom of word“, Wendt pointed out.

„We are focused on CSOs and we bring great flexibility and the independence of action. Over the last five years we supported different programs in different countries over the globe, such as women domestic observer groups and youth groups. In terms of challenges and lessons learned, we tried to be as flexible as possible on restrictions“, Millar said.

He explained that there were support measures that delegations can use in extreme circumstances.

„Recently we’ve adopted the guide for observers. The idea is to support the methodology on domestic election process and support advocacy activities into electoral reform. Digital technologies have provided many possibilities, but also imposed many threats; we’ve been told by the experts that in many ways these technology developments have increased the speed of shrinking space rather that preventing it. We have to look how to mould and empower the civil society and domestic observers on the use of those technologies.“ Millar specified.

Representative of COTE Rule of Law, Fundamental Rights and Democracy, DG NEAR, European Commission, Carolina Lasso Navarro, pointed out that the common thing for three different regions, three types of relations with EU was the need for policy dialogue and our assistance in promotion of democracy, the rule of law and human rights.

„That is the fundament of our Treaty and it has to be a backbone of any relationship with our neighbours and future partners in this European project“, Lasso Navarro said.

Head of Election Department at OSCE Office for Democratic Institutions and Human Rights, Alexander Shlyk  highlighted the importance of the citizen observation.