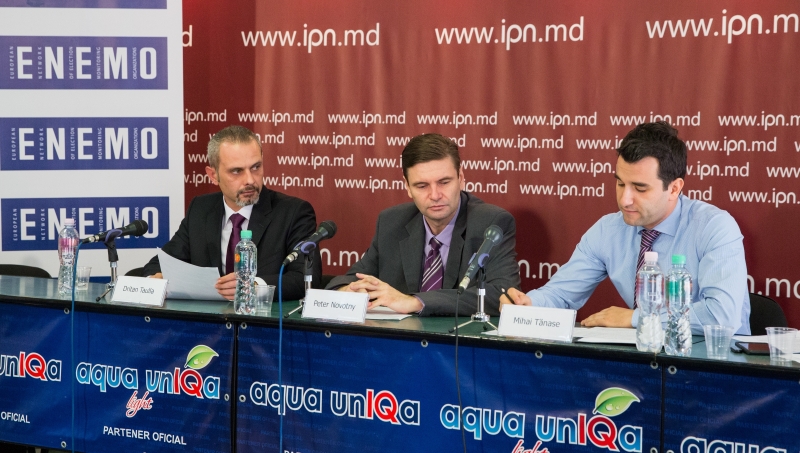 For the download of the document please scrole to the end of the page.

Chisinau, 1 November 2016 - On 30 October, the citizens of Moldova voted to elect the President of the Republic for the first time since 1996. The elections took place in an overall political context characterized by lack of trust in the institutions and political establishment. However, Moldovan citizens headed for the polls on Sunday to elect among nine candidates, marking a turnout of over 49% and showing their willingness to participate in the political life of the country.

ENEMO notes that “The legal framework generally provides a sound legal basis for the conduct of democratic presidential elections. The amendments to the Electoral Code regulating the presidential election were adopted just over three months prior to elections.  Moreover, in order to comply with the electoral calendar, the CEC adopted supplementary rules close to the deadlines, which sometimes created unnecessary uncertainty and confusion.”

The election process was administered in a transparent and open manner. The majority of members of district electoral councils and precinct electoral bureaus were professionally trained prior to elections by the Central Election Commission based training center. At the same time, in some of the commissions, ENEMO observers noted that members had difficulties with understanding the legislation, which sometimes has led to misinterpretations of the Electoral Code provisions.

The Central Election Commission made noticeable efforts in implementation of a wide voter education campaign by running advertising materials on TV and Radio, in both State language and other languages.

Moldovan voters were presented with a wide choice of candidates, however ENEMO notes that “the legal framework for elections requires to be revised, taking into account international standards, in order to provide equal playing field for all candidates, especially for inclusion of independent ones. Currently, the legislation leaves space for preferential conditions for candidates nominated by political parties with regard to campaign finances; as well as with regard to conflicting deadlines for candidate registration and start of the campaign, which led to a situation in which some candidates started campaigning ahead of others.”

The electronic voter verification system served as a very effective measure in preventing multiple voting, while it also enabled transmission of real time information from the polling stations to the CEC and to the public. In some polling stations ENEMO observers noticed technical problems in its functioning, problems that were promptly resolved and that did not affect the voting process significantly.

Substantial legal requirements for the campaign finance were introduced in 2015, however, ENEMO emphasizes that “the Electoral Code still lacks clarity or regulation on various aspects of the candidate campaign finance. The CEC applied the sanctions for campaign violations inconsistently and its decisions lacked sufficient legal reasoning on imposing one or other sanction. In addition, the CEC had no sufficient funds and human resources to verify the campaign finance properly.”

The complaints and appeals were adjudicated in timely manner and within the legal deadlines. The CEC considered complaints in an open manner and following procedures. However, decisions on complaints were not taken by unanimous vote, thus highlighting the CEC members’ political sympathies.

Moldovan media suffers from strong partisanship, polarization and lack of autonomy from political and business interest, as well as high concentration of ownership, which threatens pluralism. The conduct of audiovisual media is monitored and regulated, but print media and internet are not. Some broadcasters were sanctioned for unbalanced coverage but both monitoring modalities and sanctioning mechanisms are not effective and fail to ensure balanced and impartial coverage of the electoral campaign.

The Central Election Commission of Moldova has accredited a large number of domestic and international observers. While the Electoral Code provides for adequate rights and responsibilities of observers, the process of accreditations of international observers has been in certain cases delayed beyond deadlines, thus limiting them in the observation of the pre-election period.

A total number of ten opening polling stations were observed during the opening, the voting procedures were observed in 114 polling stations and the counting of the votes in ten polling stations. Based on the reports and information received from the observers deployed countrywide on Election Day, the preliminary assessment of ENEMO is that the polling on 30 October 2016 was conducted orderly and in a transparent manner, generally in compliance with the international standards. Procedural irregularities observed in limited scope or of isolated instances did not have negative impact on the election process, as they resulted from lack of clear instructions, or negligent attitude of the members of the precinct electoral bureaus.

The Statement of Preliminary Findings and Conclusions in English and Romanian can be found here.

Press release in Romanian and English.