Launch of the Mission 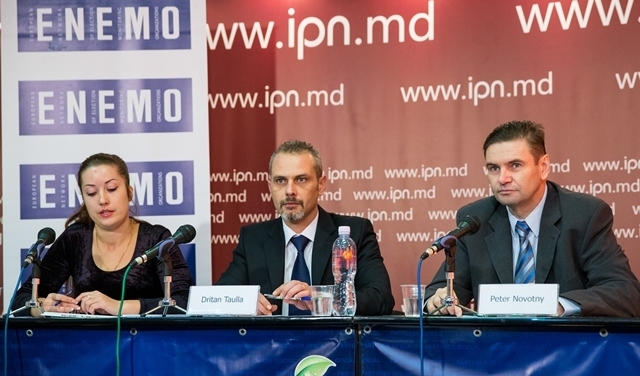 Chisinau, 18 October 2016 - The European Network of Election Monitoring Organizations (ENEMO) has deployed an Election Observation Mission (EOM) to monitor the Presidential Elections, scheduled for 30 October 2016, in the Republic of Moldova. ENEMO has a long standing experience in observing elections in countries with democracies in transition in Central and Eastern Europe and Central Asia, the present EOM being the 23rd election observation mission organized.

The mission’s aim is to contribute toward improved integrity and transparency of the electoral process for the Presidential elections in the Republic of Moldova. To achieve this aim, the EOM will observe, assess, report, and provide recommendations on some crucial aspects of the process, such as, conduct of election administration bodies; legal framework, with emphasis on gender equity and respect for the rights of people living with disabilities; handling of complaints and appeals by both election administration bodies and courts; as well as the overall political environment in which elections will take place.

The EOM will assess the election process in light of compliance with international standards for democratic elections, national legislative framework, and OSCE commitments. Besides direct observation and analysis of the legal framework, the observers will meet with relevant stakeholders, including election administration officials, civil society representatives, presidential candidates, political parties, officials of relevant state institutions that play a role in the electoral process, and media representatives, to receive a more comprehensive picture about the electoral process. All activities will be carried out in compliance with the best practices and standards for international observation of elections, which the Network endorses.

The EOM is composed of a core team of six experts based in Chisinau, which was deployed in Moldova on 10 October 2016. Additionally, ten teams of short-term observers (STOs) will be deployed in different areas of the country for Election Day to observe the opening of the polling stations, voting process, counting and tabulation of results. STOs will be deployed in teams of two observers each, following a plan prepared by the EOM. The mission will also follow the eventual runoff elections, scheduled for 13 November 2016, and depart the country at the beginning of December 2016.

The findings of the observation will be announced to the public and relevant stakeholders through an interim report, to be published shortly before Election Day, a preliminary statement two days after Election Day, and the Final Report, to be published within 60 days from Election Day, or the date of eventual runoff elections. All reports produced during the mission shall be in full compliance with the international standards for election monitoring and shall be based on facts and evidence as observed by the EOM.

ENEMO’s International Election Observation Mission for the Presidential Elections of 30 October 2016 in Moldova is financially supported by the Embassy of the Kingdom of Netherlands, within the Accountability Fund Program; and the Black Sea Trust, a Project of the German Marshall Fund of the United States.

Downloadable version in Romanian and English.