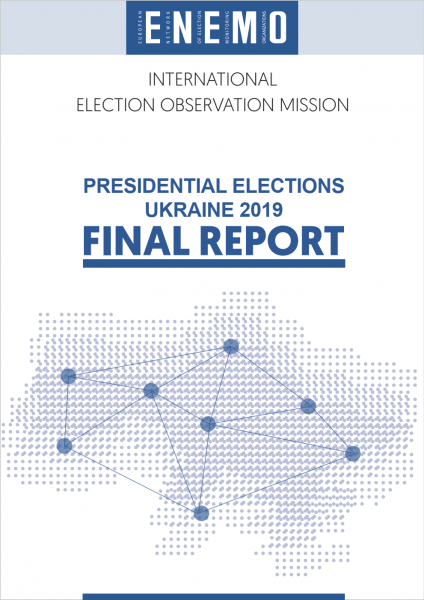 In spite of consensus regarding the need to reform electoral legislation, substantial changes have not been realized for the presidential elections. Notwithstanding the remaining shortcomings, the existing legal framework provides sufficient grounds for the election to be conducted in line with international standards.

This was stated in the Final Report published by ENEMO IEOM to Ukraine 2019, Presidential Elections.

“In general, the Central Election Commission (CEC) operated in an open and collegial manner. Its official sessions were open to observers, the media and candidate representatives. However, the CEC also held 10 IEOM PRESIDENTIAL ELECTIONS - UKRAINE 2019 preparatory meetings that were closed to the media and domestic observers; the presence of observers at such sessions was at the discretion of the CEC and was at times denied, limiting the transparency of its work. DECs were transparent and open to accredited observers and media”, reads the report.

“Despite the efforts of civil society organizations to provide voter education, the conduct of voter education by state and election administration bodies seemed to vary considerably by region. Observations showed that no comprehensive or systematic voter education programmes appeared to be in place for this election, to encourage voters to check their data online or to verify their information in the voter lists”, states the report.

Overall, ENEMO has evaluated that the conditions for free campaigning were present in the election, although shortcomings in the electoral legislation enabled candidates to either abuse legal loopholes or commit violations to campaign rules (such as campaigning on the “day of silence” or before the prescribed periods) without being sanctioned. In addition, some candidates’ campaigns did not focus on election platforms and political programmes, but rather on individual personalities and discrediting political opponents.

Additionally, ENEMO has noted that the enforcement of campaign finance rules fails to facilitate adequate reaction to the issue of voter bribery and misuse of administrative resources, and that the legal framework contains improper provisions regarding the financing of campaigning, namely a clear stance on distinguishing campaign expenses from state budget funds. This contains the risk that incumbents capitalise on certain events as a platform for campaigning.

“ENEMO has recognized a lack of transparency with regard to the financing of candidates’ campaigns in both rounds, which were partly financed from sources other than the official accounts for campaigning, such as state resources and external financing. Presidential elections were held under a media system characterized by the considerable influence of media owners over their editorial policies and open support for specific candidates throughout the election campaign, a lack of strong public broadcaster that could balance the political polarization of media outlets, and the growing role of new media, including social networks. Principles of fairness, balance and impartiality in the media coverage of the election campaigns were insufficiently respected, including a lack of equal and unbiased treatment of all candidates. Black PR campaigns, both in traditional and social media, as well as “jeansa” payments, improperly marked advertisements and new forms of concealed propaganda, were highly present and reported to respective institutions, but were not adequately addressed due to the lack of clear jurisdiction and sanctioning mechanisms of the institutions in charge of media oversight", states the report.

Despite the considerable number of accredited observers, ENEMO did not witness any cases of interference in the election process by observers. The analysis of complaints to all levels of the election administration and judiciary did not indicate any significant trend or systematic attempt to negatively affect the election process and results. However, ENEMO has noted that the complaints and appeals system is unnecessarily restrictive and complicated. Indeed, the complainant is required to fulfil complex criteria to submit a complaint to the election administration and courts.

Furhermore, ENEMO has acknowledged that the CEC does not provide a publicly available unified registry of complaints, and so the content and number of complaints and requests submitted to the CEC remain publicly unavailable until the CEC publishes its resolution on its webpage.

The full final report in English can be downloaded HERE

The full final report in Ukrainian can be downloaded HERE