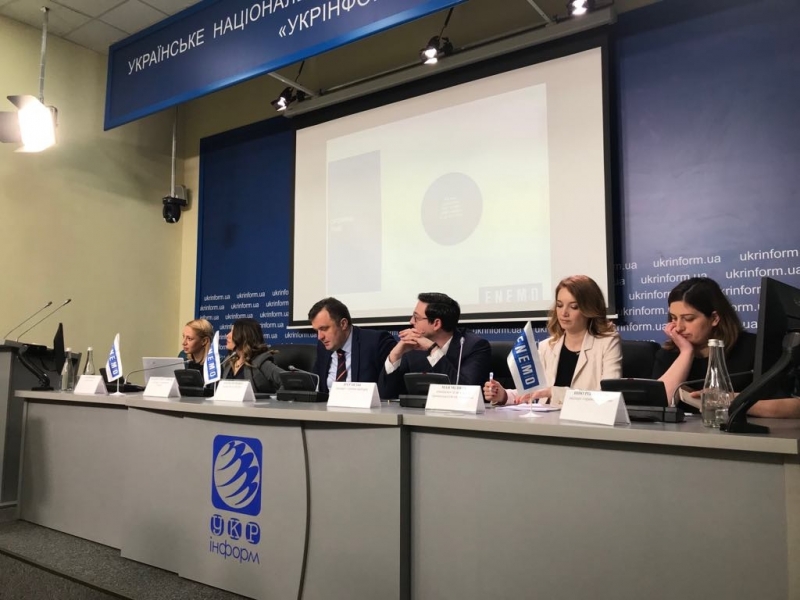 Kyiv, April 23, 2019 – The European Network of Election Monitoring Organizations (ENEMO) preliminarily assesses that the second round of the election was mostly conducted in line with international election standards, despite shortcomings in the legislation misused by candidates to campaign through questionable means and smear campaigns.

This was stated at the press conference held at the UKRINFORM press center where ENEMO presented its preliminary statement.

“ENEMO praises the conduct of the vote which was generally well organized, with minor violations not affecting the outcome of the election results. Previous concerns regarding challenges in nominations of election commission members for the second round were mitigated through the commendable efforts of the election administration” stated Mr. Vujovic.

Additionally, she explained that the overall assessment of the counting procedures by ENEMO observers was positive (very good or good) in 96% of the observed polling stations. However, observers assessed that the observed deviations did not seem to impact the legitimacy of results.

ENEMO observers monitored the transfer of election materials and respective intake for 91 polling stations and overall procedures at 100 DECs. The transfer of materials was done in an orderly manner and following the procedures in all cases.

Election Expert Mr. Pierre Peytier said that ENEMO notes that the presidential race in the second round did not focus on candidates’ campaign platforms but rather on discussions around participation in the debates, the opponent's character and smear campaigns.

“Negative campaigning and harsh rhetoric used by both candidates marked the media environment in the lead up to the second round. Lack of regulations concerning campaigning on social media allowed candidates to carry out direct or indirect campaigning beyond the legally prescribed timelines and during the “day of silence”. Both candidates dominantly used social media platforms to outreach and mobilize voters” said Mr. Peytier.

Additionally, he said that ENEMO raises concerns with regard to the use of illegal and controversial campaign materials, printed and digital, which use false information aiming at discrediting the credibility and dignity of candidates. Also, campaign platforms and political positions of candidates were not clearly voiced to voters, with candidates focusing instead on discrediting of one another.

Ms. Maja Milikic, Press Officer of ENEMO Mission stated: “ENEMO stresses that this statement is preliminary in nature, as the official results are yet to be announced and submitted complaints are still to be addressed. ENEMO will continue to follow the election process and will issue a final report two months following the conduct of the second round”.

ENEMO’s international observation mission for Ukrainian Presidential Elections 2019 is financially supported by the United States Agency for International Development through the National Democratic Institute, the Federal Foreign Office of the Federal Republic of Germany and the European Union.