ENEMO enjoys the reputation of having impartial and professional observers 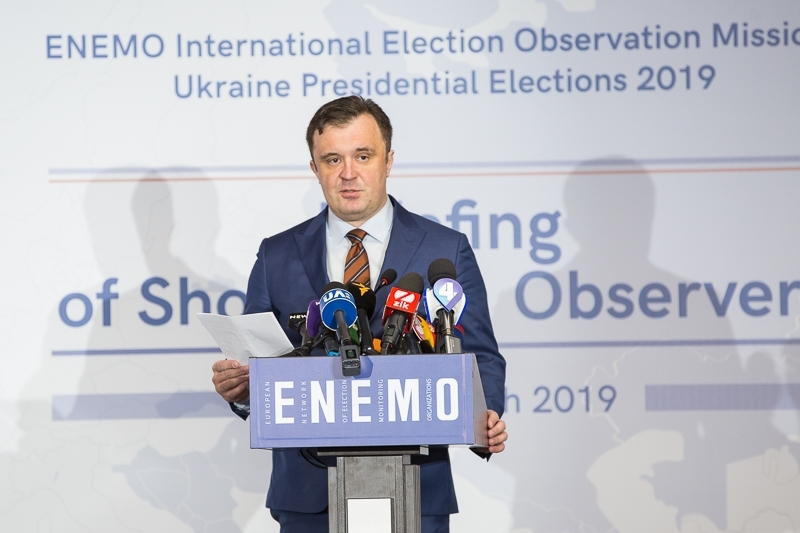 Kyiv, March 29, 2019 – ENEMO enjoys the reputation of having impartial and professional observers and has a huge network of activists, human rights defenders and dissidents who are fighting for freedom and democracy, said the Head of the ENEMO Mission, Mr Zlatko Vujovic.

At the Briefing of the Short-Term Observers (STOs) held in Kyiv, he said that the mission is composed of ten Core Team members, 48 LTOs and 158 STOs who will be deployed in all regions after this briefing.

„We are happy and thankful that so many of you found time to join the ENEMO team. This is the eleventh time that ENEMO observes elections in Ukraine. We have observed all national elections since 2004. All this time we have been here to support the process of democratization of Ukraine”, stated Vujovic.

He said that ENEMO enjoys the reputation of having impartial and professional observers.

“ENEMO has a huge network of activists, human rights defenders and dissidents who are fighting for freedom and democracy. We are proud of our achievements as ENEMO and of all our member organizations”, said Vujovic.

He explained that this Sunday ENEMO will observe the first round of presidential elections and said that performance of STOs is important for the success of the mission.

“This is a historic moment for Ukraine. The second presidential election since 2014, after Euromaidan. This election will be a test for further democratic consolidation of Ukraine. We want to support this process, recognizing that it is the people of Ukraine who will be the ultimate judge of the credibility of this election and the country’s future”, Vujovic pointed out.

U.S. Ambassador to Ukraine Ms Marie Yovanovitch reminded that, since 2004, the United States has been a proud partner of ENEMO.

“We are happy to continue supporting the important observation mission to Ukraine, at this critical time in the country’s history, as Ukraine continues its transformation to a modern and prosperous democracy. Respecting and adhering to the principles of free and fair elections lies at the heart of any democracy and fundamental Euro-Atlantic values that Ukrainians embrace”, said Yovanovitch.

She explained that not only do impartial and independent election observations ensure that the electoral process is working, but they also increase public confidence and legitimacy of the results.

“The Central Election Commission is comprised of the members from different parties and has a huge role, crucial to demonstrating the success of Ukrainian democracy”, said Yovanovitch.

German Ambassador to Ukraine Ernst Reichel expressed support for the mission and highlighted the importance of this election. “This election is important for the democratization process and Ukraine’s ambition to join the EU” he said.

“We expect that this will be competitive election, because now, two days before the elections, no one knows who will win and what the result will be. This is proof that Ukraine is democratic. We want this election to confirm and strengthen the democratic character of Ukraine,” said the head of the EU Delegation to Ukraine, Hugues Mingarelli.

The Briefing themes were finance and logistic, the political background, campaign and candidates, legal framework, election administration and E-Day procedures, code of conduct and reporting system and security.