ENEMO set conditions for observation of the Second Round 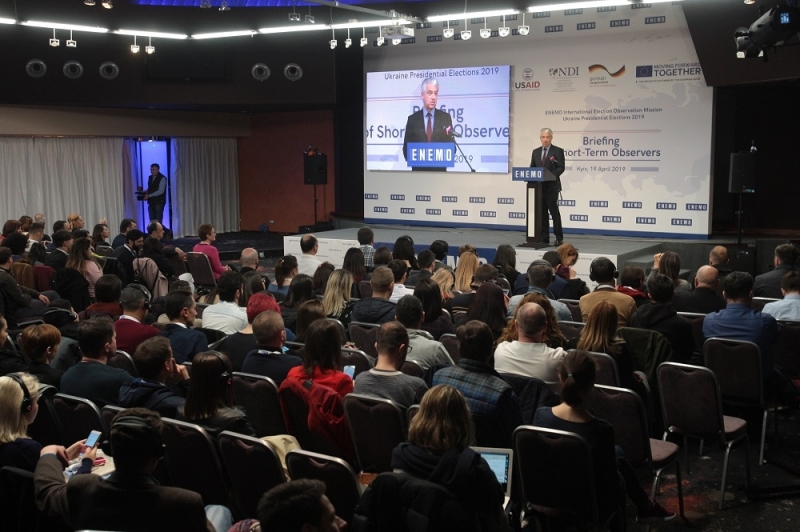 Kyiv, April 19, 2019 – Over the last three months, ENEMO Core Team and LTOs have done huge number of very complex activities in observing First round of Presidential elections as well to set conditions for observation of the Second Round, said the Head of the ENEMO Mission to Ukraine, Mr Zlatko Vujovic.

At the Briefing of the Short-Term Observers (STOs) held in Kyiv, he said that the during the E-day on March 29, 2019 ENEMO IEOM has deployed 158 STOs in teams of 79, who were joined by 24 LTO teams who were also observing the E-day and reporting to the Core Team.

Vujovic explained: „Thanks to that ENEMO was able to publish two Interim reports before the first round, preliminary statement and the third interim report between two rounds. We expect the same from STOs for the Second round. We expect from our STOs with their behavior to confirm ENEMO's reputation of having impartial and professional observers. ENEMO has huge network of activists, human rights defenders as well as dissidents who are fighting for living in freedom and democracy”.

He said that this is the eleventh time that ENEMO observes elections in Ukraine. ENEMO has observed all national elections since 2004. All this time ENEMO was in Ukraine to support process of democratization.

“These elections will be a test for further democratic consolidation of Ukraine. We, as ENEMO, want to support that, recognizing that it is the people of Ukraine who will be the ultimate judge on the credibility of these elections and their country’s future”, said Vujovic.

He explained that this this Sunday, ENEMO will observe the Second round of Presidential elections and performance of ENEMO’s observers is crucial for the success of the Mission.

U.S. Ambassador to Ukraine Ms Marie Yovanovitch reminded that, the first round of elections had been held on a competitive basis, free from cruelty and illegitimate processes.

“ENEMO’s preliminary statement after the first round of election states that the election was conducted in a transparent and efficient manner mostly in line with Ukrainian laws and international standards”, said Yovanovitch.

She explained that according the polls, there has been an increased trust in electoral process and that the same trend line is increasing for trust in Central Election Commission.

“That is so positive for Ukrainian democratic development, that Ukrainian people have trust in electoral process and we hope that Sunday will continue that positive trend because we share Ukrainian high expectations for electoral process, when I and many others will be joining you, ENEMO observers, to observe elections”, said Yovanovitch.

German ambassador Ernst Reichel commented on the uniqueness of the current electoral campaign in Ukraine.

“Europe showed considerable interest for the Ukrainian electoral campaign. The campaign has been particularly entertaining and eventful. Electoral rallies and TV debate on the stadium maybe the first one worldwide”, said Mr. Rechel.

He added that the outcomes of these elections are not known and that it is a very good sign of democracy in Ukraine.

“The role of observers deployed by ENEMO is crucial. We count on ENEMO to identify the challenges which we will face during the Election Day”, said Hugues Mingarelli,EU Ambassador to Ukraine.

He added: “I would like to underline the importance of impartial and nonpartisan observation. The overall goal of the observation mission of ENEMO is to monitor and assess Ukrainian compliance with international commitments. ENEMO is reliable network with a lot of experience and works in serious way and for us present the guarantee that the election will be monitored in the right way”.