ENEMO publishes its Final report on Local Elections in Ukraine 2020 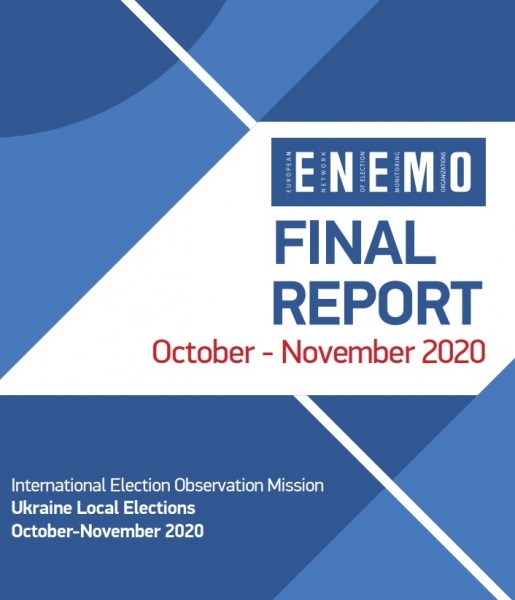 A total of 1,421 mayoral positions and 43,492 local council seats were contested during the 2020 Local Elections, and voters were offered a genuinely pluralistic political choice. However, these elections were particularly challenging in light of the worldwide COVID-19 pandemic and fairly late electoral reforms, leaving space for improvement.

With regard to the ongoing conflict in a number of Eastern Ukrainian territories and the prevailing security risk posed by holding elections in those areas, elections were not conducted in 18 communities (hromadas) in Donetsk and Luhansk oblasts. As a consequence of this decision, which was upheld by the Ukrainian government, nearly half a million voters could not exercise their franchise and were deprived of their constitutional right to vote.

The 2020 Local Elections were the first to be held under a new Election Code, adopted in December 2019, which unified the electoral legal framework and introduced significant amendments to the Ukrainian electoral system. Improvements to the Code included the introduction of open party lists for oblast, rayon, city district councils and councils in cities, villages and settlements with 10,000 or more voters; limiting the possibility for parallel systems of election dispute resolution; simplified procedures for voters to change electoral address and thereby facilitate voter registration; and a mandatory gender quota, which was a significant step forward in increasing gender representation.

Changes to the Election Code were largely positive and ENEMO also positively assessed their implementation by election management bodies (EMBs), including the Central Election Commission (CEC), allowing the 2020 Local Elections to take place in an overall free environment largely in line with international standards. The Election Days during both the first and second rounds were generally orderly and peaceful, despite some shortcomings observed by the mission.

However, numerous challenges were also noted, including the enactment of new electoral legislation relatively late in the process; a complex new electoral system, which complicated the work of the local election administration; the problem of holding polls in the midst of the COVID-19 pandemic and the concurrent need to ensure PPE (personal protective equipment) at polling stations; frequent replacement of election commission members, which negatively impacted the effectiveness of some local commissions; and the late announcement of first round results, leading to delays in conducting the second rounds in some areas.

The election campaign was fairly low-key due to the limitations imposed by the pandemic, but was inclusive despite the lack of possibility for independent candidates to run. However, the campaign was frequently marred by abuse of incumbency (a recurring shortcoming of the electoral process in Ukraine), allegations of vote buying, negative campaigning, disinformation in some media, and a lack of transparency in political finance. All of these factors are important and need to be addressed through further reform.

ENEMO therefore assessed that the newly adopted Election Code, while generally improving the framework for conducting local elections in Ukraine, did not fully address a number of previously identified gaps, such as the ineffectiveness and lack of enforcement of campaign financing regulations; the abuse of state resources; political parties struggling to meet the new gender requirement during the candidate registration process; the constant replacement of members of Territorial Election Commissions (TECs) and Precinct Election Commissions (PECs); confusing procedures for promulgating results; and inconsistent provisions related to the holding of run-off rounds.

The ENEMO International Election Observation Mission for the 2020 Local Elections in Ukraine concludes that international standards were mostly met. However, in order to further strengthen the electoral framework and process for Local Elections in Ukraine so as to fully meet international standards, ENEMO recommends that poor and illicit practices must be addressed, and further reforms should be undertaken to address observed shortcomings in the Election Code. Necessary reforms and improvements include, but are not limited to, enhanced training and preparation of election commission members; ensuring the gender quota is met during the process for both the nomination and confirmation of candidates; ensuring the timeframe for campaigning is the same for all and campaign finance requirements are more transparent; streamlining the complaints and appeals period so as to ensure synchronized dates for holding second rounds; and enhanced education of voters and commission members with regards to the electoral system per se. It is important that all necessary reforms are undertaken in good time before the next election.

The Final Report in English can be downloaded here: ENEMOFinalreportUkraine2020.pdf

The Final Report in Ukrainian can be downloaded here: ENEMOFinalReportUKR.pdf