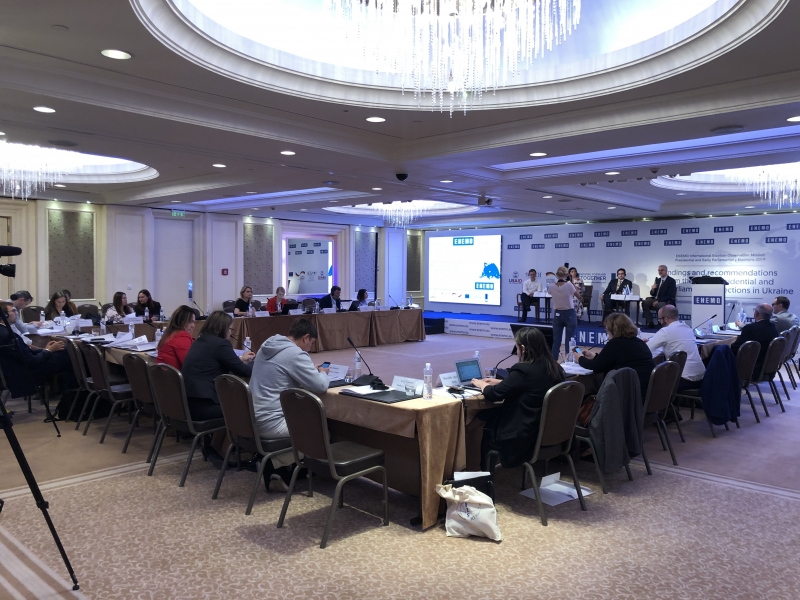 Kyiv, September 5, 2019 – “ENEMO observers conducted more than 4000 meetings with various interlocutors, attended 400 DEC sessions (all DECS), reported on more than 200 campaign events and they observed 144 training sessions for commission members”, said Zlatko Vujovic, Head of the ENEMO Mission to Ukraine at the opening of the Round Table “Findings and recommendations from the 2019 Presidential and Early Parliamentary Elections in Ukraine” held at the Hotel Hyatt Regency.

Furthermore Mr. Vujovic explained more about ENEMO activities during 2019 Presidential and Early Parliamentary Elections and thanked to donors of missions for both elections, the United States Agency for International Development through the National Democratic Institute, the Federal Foreign Office of the Federal Republic of Germany, European Union and the Kingdom of the Netherlands.

Besides Mr. Vujovic, participants were also addressed by Ms. Tetyana Volodymyrivna Slipachuk, Chairman, CEC who emphasized the importance of presence of ENEMO observers.

During the second panel, participants had the opportunity to hear presentations on findings and recommendations from domestic CSOs, Olga Aivasovska, Chairman of the Board, OPORA and Nazar Boyko, Monitoring-Analytics Group CIFRA.

After the presentations, the open discussion took place and participants had the opportunity to deliberate about the challenges the election administration is facing and the perspectives of electoral reform.

Participants at the round table were international and domestic election experts, representatives of the election administration, SCOs and media.

The full reports in English and Ukrainian can be downloaded below: