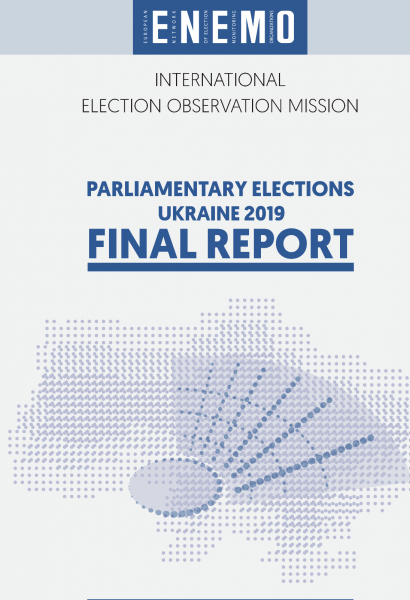 The expectations of Ukrainian citizens were high in this election regarding the new composition of parliament, in continuation of the trends observed during the presidential elections held earlier this year. The presidential elections 2019 showed that many citizens hoped for advances in the reform agenda, the fight against corruption, and a renewal of the political elite.

"Parliamentary elections were held under the same legislation as for the previous early parliamentary elections in 2014. Although there is an overall legal framework for holding democratic and fair elections in Ukraine, the existing law on parliamentary elections did not provide effective mechanisms to cope with most shortcomings reported by ENEMO and other international and domestic election monitoring missions during previous elections, especially those related to ineffective oversight and sanctioning mechanisms for election campaigning and financing, the abuse of state resources, registration of candidates, double jurisdiction of election dispute resolution, media conduct, composition of lower levels of election administration, etc.", states the report.

In the report, ENEMO assessed that Election Day was, overall, calm and peaceful. The management of the polling and conduct of Precinct Election Commissions (PECs) and DECs were assessed positively in the majority of cases, with slight procedural violations in some polling stations, which were assessed as not having negatively affected the legitimacy of the results. The voter turnout, as announced officially by the Central Election Commission (CEC), was 49.84%, and the results of the election showed considerable support for the “Servant of the People” presidential party which obtained an absolute majority of 254 seats (124 through the party list, 130 through single-mandate constituencies).

ENEMO notes that the results of the election suggest that 86 newly-elected MPs will be women, which is slightly over 20% of the Parliament’s composition, a positive increase in comparison with women’s representation under the VIII convocation of the Verkhovna Rada.

“Elections were held in a competitively and generally peaceful environment, despite tight deadlines and remaining shortcomings in the legislation. The election administration functioned in an overall transparent and efficient manner”, reads the report.

Furthermore, the report states: “No major concerns need to be raised with regard to the accuracy of voter lists, despite minor mistakes which were mostly corrected in time, and considerable queues at voter registration offices closer to the registration deadline, due to a large increase in requests. ENEMO notes that additional steps are required for access to persons with disabilities (PWDs) at voter registration offices and polling stations, and amendments to the legislation for the full enfranchisement of internally displaced persons (IDPs)”.

The elections were overall competitive, and candidates were generally free to campaign without major obstacles. ENEMO observed a higher level of active campaigning by majoritarian single-mandate district candidates, with the visibility of campaigning at the local level surpassing campaigning on the national scale.

It is stated: “ENEMO observed that campaigning was ongoing on the” day of silence”, and on Election Day, with open campaigning on digital platforms, cases of newly replaced billboards, and signs of campaigning and campaign materials inside or in the vicinity of polling stations in isolated cases. Early campaigning also remains unsanctioned within the law”.

“NGOs were used as a means to finance political parties (NGOs are not required by law to publish financial reports) and third-party companies organized campaign events through expenses which do not appear in reports. ENEMO assesses this as a risk through the use of this opportunity as a means to conceal revenues and expenditures used for campaigning”, reads the report.

The media played a key role during these elections. Contestants spent more than two-thirds of their election funds on TV advertisements and paid outreach through social platforms. Voters were able to obtain information about the campaigns of election contestants, bearing in mind the diversity of media outlets and the level of usage of social media platforms.

The report shows “ENEMO notes that there is no publicly available registry of all submitted complaints at any level of election administration, which limits the transparency of the process. Although a high number of complaints are reported to the police, the majority are not classified as a crime, nor an offence, and are still pending, which may limit effective legal remedy”.

The full report in English can be downloaded HERE

The full report in Ukrainian can be dowloaded HERE