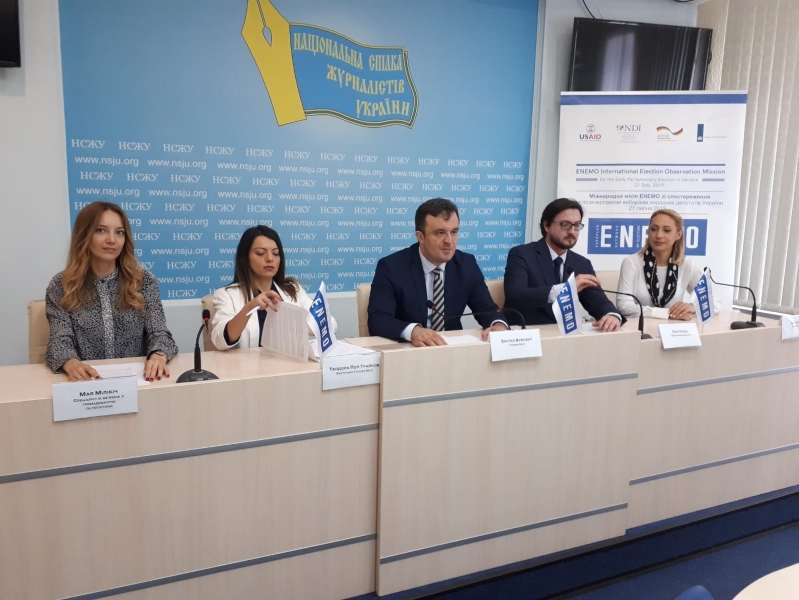 Kyiv, July 23 – The European Network of Election Monitoring Organizations (ENEMO) preliminarily assesses that elections were held in a competitive and generally peaceful environment, despite tight deadlines and ongoing shortcomings in the legislation.

This was stated at the press conference held at the National Union of Journalists of Ukraine where ENEMO presented its preliminary statement.

Mr. Zlatko Vujovic, Head of ENEMO Mission said: “Election administration functioned in an overall transparent and efficient manner. However, ineffective oversight and sanctioning mechanisms for election campaigning and financing, as well as media conduct, were often misused by candidates and parties to influence voters’ support. Involvement of state officials in campaigning, alleged pressure on voters and a high number of initiated cases on vote buying were reported, especially in favor of candidates in single-mandate constituencies”.

ENEMO observed that the election administration faced considerable challenges due to short deadlines and a strenuous calendar for holding the election.

Mr. Pierre Peytier, Political Analyst stated: “These short time frames also affected other election stakeholders, including parties and candidates who had less time for campaigning. The process of candidate registration revealed issues, particularly the five-year residency requirement, registration/deregistration of candidates, and late inclusion of parties in the race, resulting in numerous court cases and additional pressure on the CEC”.

ENEMO highlights the professionalism of the CEC and timely management of the electoral process, given the challenges faced regarding procurement and candidate registration. While the CEC generally operated in a transparent manner, preparatory meetings were only open to observers upon request.

Mr. Peytier said: “The campaign was most visible during the last two weeks before the poll. Although the campaign was genuinely competitive, ENEMO observed that early campaigning, different campaign violations and non-compliance with campaign financing rules are not properly sanctioned within the law, resulting in loopholes abused by candidates and parties to circumvent principles of fair campaigning”.

ENEMO notes the lack of effective and dissuasive sanctions to candidates and parties for campaign financing violations and discrepancies between reported funds and levels of campaign activity, in particular digital campaigning.

“Observers reported cases of involvement of mayors actively supporting candidates in single-mandate constituencies through campaign videos or campaign events. In several cases, allegations of billboard space purchased in excess by parties to deny visibility to other parties or candidates were also mentioned”, added Mr. Peytier.

ENEMO observed that media played a key role during these elections. Contestants spent more than two-thirds of their election funds on TV advertisements and paid outreach through social platforms.

Ms. Ana Nenezic, Media Analyst said: “Media played a key role during these elections and voters had the possibility to obtain information about the election contestant’s campaigns, bearing in mind the diversity of media outlets. However, equal and impartial treatment was not sufficiently insured, due to centralized media ownership and strongly influenced editorial policies which continues to be one of the main obstacles for the fulfillment of election law provisions stipulating that both public and private media should offer balanced and unbiased coverage of all contestants”.

Ms. Teodora Pop Trajkov, Deputy Head of Mission said: “All observed polling stations were equipped with all essential materials needed for the voting at the moment of opening. However, some PECs were provided with fewer ballot papers than the number of voters in the rolls. In 96.6% of observed polling stations, the opening procedures were assessed positively”.

The overall assessment of the voting process was positive in almost all polling stations ENEMO observed.

The transfer of materials was done in an orderly manner and following the procedures in all polling stations in which ENEMO observed this process.

Furthermore, ENEMO notes that there is no publicly available registry of complaints at any level of election administration, which limits the transparency of the process. Although a high number of complaints are reported to the police, the majority are not classified as a crime, nor an offence and are still pending, which may limit effective legal remedy.

Ms. Maja Milikic, Press Officer of ENEMO Mission stated: “This statement is based on ENEMO mission observations and findings during the pre-election period and on election day. ENEMO stresses that this statement is preliminary in nature, as the official results are yet to be announced and submitted complaints are still to be addressed. ENEMO will continue to follow the election process and will issue a final report in September”.

ENEMO’s international election observation mission for Ukrainian Parliamentary Elections 2019 is financially supported by the United States Agency for International Development through the National Democratic Institute, the Federal Foreign Office of the Federal Republic of Germany and Kingdom of the Netherlands. The content of the document is the sole responsibility of ENEMO and does not necessarily need to represent the position of the donors.

Preliminary Statement in English can be downoladed HERE

Preliminary Statement in Ukrainian can be downloaded HERE

Press release in Ukrainan languge can be downloaded: HERE