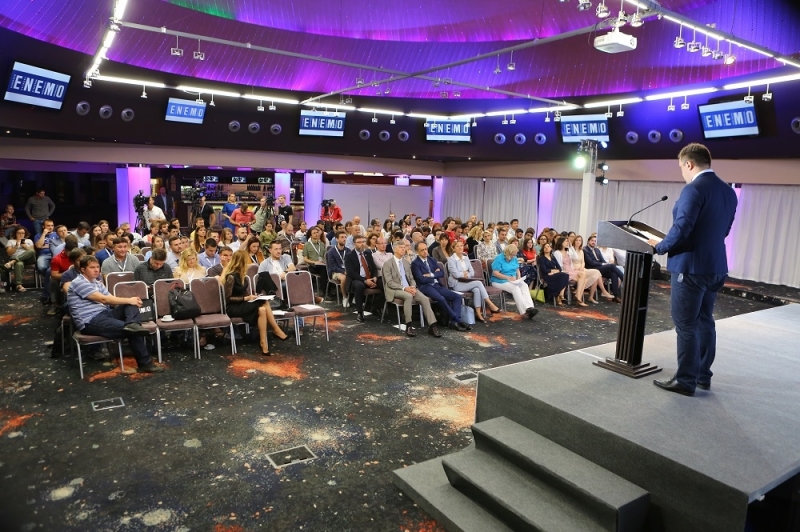 During the Briefing of Short Term Observers, organized in Kyiv, Mr. Vujovic that During the E-day ENEMO IEOM will deploy 76 STOs in teams of 38, who will be joined by 20 LTO teams who will be also observing the E-day and will report to the Core Team.

Mr. Vujovic explained: „This is the twelfth time that ENEMO observes elections in Ukraine. We observed all national elections since 2004. All this time we were here to support process of democratization of Ukraine. This Sunday, we will observe Parliamentary elections. Your performance is crucial for the success of the Mission. These elections are of crucial importance for Ukraine. They will be test for further democratic consolidation of Ukraine”.

He said that ENEMO belongs to leading international organizations, which signed UN Declaration of Principles for International Election Observation and Code of Conduct of International Observers.

U.S. Ambassador to Ukraine Mr. William B. Taylor reminded that the second round of presidential elections has been widely assessed to be the best elections that Ukraine has ever had.

“The elections on Sunday should be even better. ENEMO has an opportunity to observe, your presence and your observations will be very important for the quality of these elections”, said Taylor.

He explained that Ukrainians are eager to show that they will continue the path of democracy and that they are committed to democratic country, democratic values and European and Western values.

“It was not long ago when only 30 percent of Ukrainians trusted the Central Election Commission. That has tremendously increased. That’s now 70 percent. That’s just another indication of values that Ukrainians put in free and fair elections”, said Taylor.

Alongside Mr. Vujovic and Mr. Talylor, German Ambassador Mrs. Anka Feldhusen, First Secretary of the Embassy of the Kingdom of the Netherlands Mrs. Riny Bus and EU ambassador Hugues Mingarelli also addressed to the STOs.

German Ambassador Mrs. Anka Feldhusen commented that it is very important to have information that STOs will provide.

“In order to counter different interpretations of the election assessment, we need all the information that we can gather on Election Day. I hope that these elections will put this country forward and give this country stability and strength to go on with reforms so that Ukrainians can move on the way to Europe”, said Mrs. Feldhusen.

Mrs. Riny Bus, First Secretary of the Embassy of the Kingdom of the Netherlands said: “It seems that confidence in Ukraine is growing and that’s not only confidence of people who want to vote but it’s also the confidence of entrepreneurs and people in Western Ukraine. Let’s hope for a high turnout and for constructive elections which will result in a good government”.

Mr. Hugues Mingarelli, EU Ambassador to Ukraine said: “ENEMO has been playing a crucial role in electoral processes in Ukraine since 2004 and we are sure that this time again you will have avkey role in ensuring free and fair elections”.

He added: “Presidential elections, we had few weeks ago in Ukraine were conducted according to the best Western standards and I am sure that on Sunday we will have free and fair elections. Up to now, we have heard about minor irregularities but thanks to the fantastic work of the Central Election Commission everything has been fine until now and I am sure everything will be fine on Sunday”.