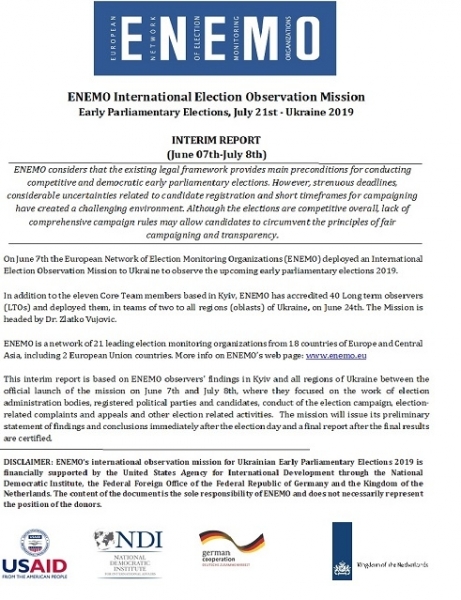 Kyiv, June 14, 2019 - ENEMO considers that the existing legal framework provides main preconditions for conducting competitive and democratic early parliamentary elections. However, strenuous deadlines, considerable uncertainties related to candidate registration and short timeframes for campaigning have created a challenging environment. Although the elections are competitive overall, lack of comprehensive campaign rules may allow candidates to circumvent the principles of fair campaigning and transparency.

This was concluded in the First Interim report for the period June 7th – July 8th 2019, published by ENEMO International Election Observation Mission (IEOM) to Ukraine.

“Due to the lack of a comprehensive legal framework and legal gaps in the parliamentary elections law, the CEC adopted a number of resolutions to address issues insufficiently explained in the existing laws. This has, however, lead to several lawsuits challenging the integrity of the electoral process”, states the report.

In total, the CEC registered 22 political parties in the nation-wide proportional constituency.

“ENEMO observed that procedures for properly filing registration documents, as well as grounds for rejection of applications were at times unclear. Back and forth of court cases and legal proceedings linked to registration of candidates and parties raised considerable uncertainty and confusion in the organization of elections”, quoted the report.

Furthermore, ENEMO notes that women are well represented in DECs (59 % of members are women) and that all DECs were established with full membership, composed of 3,582 members in total (18 members per DEC).

“Due to a high level of turnover in DEC members’ compositions by electoral subjects, some members did not attend the trainings. There are no provisions in the law limiting the number of times the electoral subjects may successively replace DEC members (up until Election Day), and no conditions with regard to the level of experience of nominated DEC member. As of July 8th, more than one third (over 35%) of DEC members have already been replaced at least once”, states the report.

Although insufficient number of candidate and party submissions to electoral commissions was foreseen as a challenge, PECs were all formed in time and without major obstacles.

“Only slightly over half of the parties in the nation-wide district respected the obligation to include 30% of women candidates (13 out of 22 parties) in their lists. In total, approximately 22,5 % of candidates in the election are women”, states the report.

The overall campaigning environment is competitive, with a variety of choices available to voters, including an array of recently formed parties. However, cases of campaign materials containing hate speech were observed, as well as violence against candidates and campaigners, and damaging of campaign materials.

“A considerable number of illegal campaign materials (improperly branded, often lacking information on source of funding and/or entity responsible for publication, etc.) were observed in most oblasts”, quoted the report.

Additionally, the report quoted: “Allegations of bribing of voters in exchange for remuneration (direct vote buying) or goods and services (indirect vote buying) were reported by observers from most regions. Lack of financial transparency and violations to financial rules of campaigning may continue to have an effect on voters’ perception, particularly with regard to levels of trust in elections”.

ENEMO notes that given the overall media environment, strongly influenced and shaped by the interests of media owners, the role and importance of the public service broadcasters is vital for the citizens’ access to comprehensive, objective and impartial information about the elections and contestants and their independence should be strongly supported.

“Contestants are granted free airtime and print space in public national and regional media, whereas the CEC, as the body responsible for this allocation, adopted a Resolution within the defined deadline”, states the report.

The full report can be downloaded here: