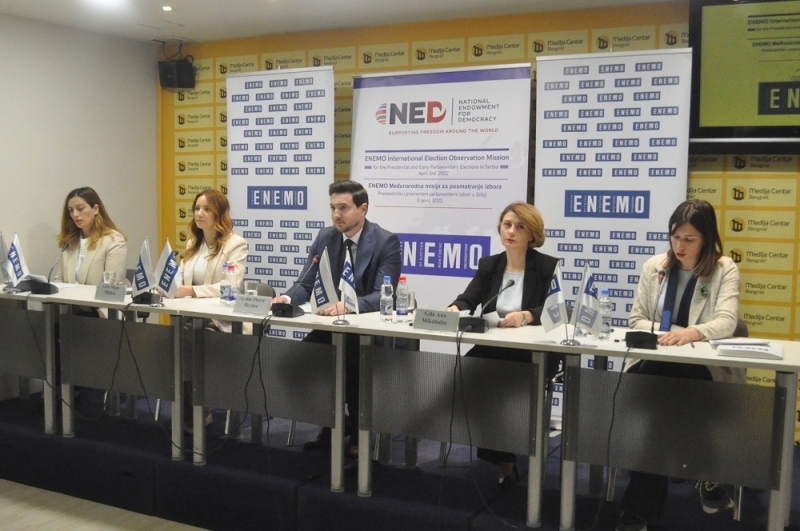 Belgrade, April 4, 2022 - Elections were generally efficiently managed by the election administration, despite violations and incidents observed on Election Day. However, the campaign was marred by allegations of misuse of state resources, abuse of incumbency, pressure on voters, and claims of inaccuracies in the voters’ register affecting overall trust in the process. Authorities responsible for campaign and media oversight did not fully ensure a level-playing field among contestants. ENEMO assesses that longstanding issues related to media accessibility, accountability, and transparency in elections remain to be addressed.

This was concluded in the statement of preliminary findings and conclusions presented at the press conference organized at the Media Center.

Mr. Pierre Peytier, Head of Mission stated: “Although the campaign was generally inclusive, it was heavily marred by allegations of misuse of state resources, abuse of incumbency, vote-buying and voter intimidation especially towards public employees by ruling coalition parties. Many of these forms of pressure were quoted as continuous, and started well before the official start of the electoral process.”

ENEMO assesses that allegations of voter intimidation and vote-buying affected general trust in the electoral process, while long standing practices of misuse of state resources and abuse of incumbency significantly limited opportunities for a level-playing field.

“The blurring of line between party and state, at odds with international standards, negatively impacted the campaign environment”, explained Mr. Peytier.

In the limited number of polling stations observed by ENEMO, Election Day procedures, including counting, were generally conducted efficiently and in accordance with the law.

Mr. Peytier added: “However, the mission was informed of cases of attacks and physical altercations in the vicinity of polling stations, violence towards candidates, and long queues of voters outside polling stations. Reportedly, although voters in queues at the time of closing (20:00) were generally allowed to vote with delays, several voters in queues were denied the possibility to exercise their right. Accordingly, this caused delays in the counting and tabulation process.”

The election administration met legal deadlines and managed technical aspects of the elections efficiently, despite the constrained deadlines.

Ms. Ana Mikeladze, Election Administration Analyst stated: “REC sessions were open and transparent, while the REC clarified aspects left ambiguous by the general provisions of the law. However, due to short timeframes following the legal amendments, many of these bylaws came late in the process. It also limited sufficient time to communicate these bylaws and ensure their understanding by lower-level elections commissions.”

ENEMO assesses that the voter registration process generally lacked transparency. Concerns should be raised regarding the accuracy of the voters’ register, mainly related to the number of deceased voters in the lists and allegations of “phantom voters”.

“Despite voters being able to review their data and request corrections, the voters’ register was not available for public scrutiny. In comparison, the preliminary number of voters on the register for the 2022 Referendum was higher by approximately 7,500, with no clear explanation for this reduction. These issues decreased the level of trust in the voter register and may have affected the general level of public confidence in the integrity of the electoral process”, added Ms. Mikeladze.

In addition, ENEMO observed a lack of sufficient media autonomy from political interests, both at the central and local level, which restricted independent reporting.

Ms. Maja Milikic, Deputy Head stated: “Many ENEMO media interlocutors expressed concerns about biased editorial policies in public and a number of mainstream private media. Debates between contestants were organized by many channels. However, leading candidates refused to jointly participate, which limited opportunities for voters to make a fully informed choice. The ruling party used the President's position to its benefit, since extensive reporting about his activities dominated in most media outlets. Despite the array of sanctions at its disposal, the REM limited its sanctions to ineffective warnings, which failed to prevent further violations.”

“However, key aspects of elections remained unaddressed. ENEMO notes that the recent amendment process was a missed opportunity to further address shortcomings related to media coverage, campaign finance regulations and misuse of administrative resources that would reduce inequality among electoral contestants. The mission observed significant discrepancies between the level of verbal complaints and allegations of irregularities with the actual number of formally submitted complaints. ENEMO noted that party representatives and voters most often refrained from submitting complaints, due to fear of retribution and low trust in the judiciary system in general” stated Ms. Nino Rizhamadze, Legal Expert.

Press release in Serbian language can be downloaded here: SRB_Pressrelese_Preliminarystatement.pdf

The full Preliminary Statement in English language can be downloaded here:  ENEMOStatementofPreliminaryFindingsandConclusionsSerbia2022.pdf

The full Preliminary Statement in Serbian language can be downloaded here: ENEMOStatementofPreliminaryFindingsandConclusionsSerbia2022_SRB.pdf