ENEMO publishes its Final report on Parliamentary Elections in Montenegro 2020 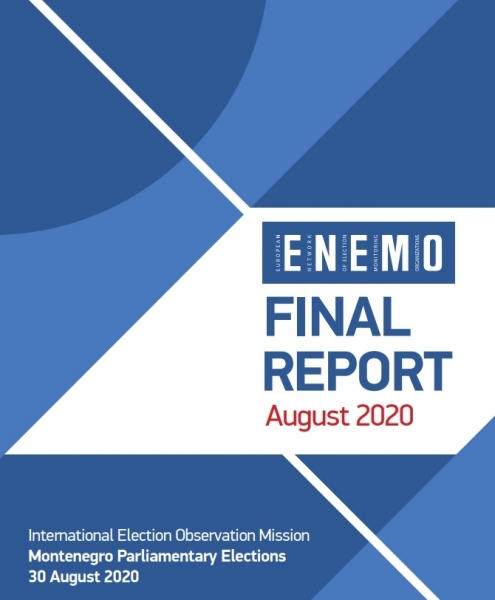 In Montenegro, it is necessary to harmonize the legal framework for elections, through comprehensive and inclusive electoral reform. Overlapping of existing laws containing contradicting or unclear provisions limit legal certainty and leave space for abuse and should therefore be addressed through an overhaul of the Law on the Election of MPs and Councilors in unison with other laws, the European Network of Election Monitoring Organizations (ENEMO) IEOM to Montenegro stated.

In its Final report ENEMO IEOM to Montenegro stated that the term of office of both the SEC and the MECs should be extended from four to five years.

It is recommended that the provision on the length of stay in the country should be removed from the Constitution and the law as a condition for voting in national elections.

"In that case, this term would be longer than the term of the deputies, which could improve the independence of SEC members," is stated in the report.

ENEMO recommends that additional mechanisms should be developed for the MoI to be able to increase the transparency of the voter lists by conducting cross checks, publishing data online and issuing messages to the public with information about the voter list verification and location of polling stations.

"ENEMO recommends introducing a legal obligation to integrate the data from voter identification devices from polling stations at the state level in order to check for double voting’’, is stated in the report.

ENEMO deems that the possibility for individual candidates to be nominated should be enabled, while the two-year residency requirement to stand for election should be harmonized with international standards, and either reconsidered entirely or not exceeding six months.

A more comprehensive and inclusive definition of electoral campaigning should be provided in the legal framework, to more extensively define the notion of campaigning. Campaigning on social media requires further efforts by the legislator to be better framed in the legislation, and monitored through dedicated institutions such as the Agency for Electronic Media.

ENEMO recommends that timeframes for campaigning should be harmonized in the laws, in order for all electoral contestants to have the possibility to start their campaigns at the same time.

‘’All deadlines for registration of candidates should expire before the official campaign period begins, as to allow for all electoral contestants to begin campaigning at the same date to create a level playing field’’, is stated in the report.

They reminded that the law allows public officials to promote election programs and lists during media appearance, while also prohibiting abuse of these media appearances, and in that case, in their opinion, the legislator should clarify within the law the notion of “abuse”, especially with regard to high state officials.

‘’Effective and dissuasive sanctions should be reinforced towards all public officials who do not respect the principles of fair campaigning and the provisions set worth within the law. Once properly defined, stricter control by oversight bodies including the Agency for Electronic Media should be conducted to measure cases where media appearances are being abused by state officials to promote electoral campaigns’’, ENEMO pointed out.

They stated that religious leaders and influencers should steer clear from attempts at involvement in the electoral process, whether during the pre-election campaign or after attribution of mandates.

ENEMO recommends to revise the decision prescribing that the voter whose ballot was invalidated due to the infringement of the secrecy of vote is not entitled to receiving another ballot. Disrespecting the secrecy of vote should not automatically deprive one’s right to vote, while repeated violations of this kind could be prevented by introducing sanctions.

ENEMO recommends to implement positive norms that would increase the participation and engagement of women in different level EMBs as well as women holding more managerial positions within EMBs. Moreover, political entities should be more inclusive towards women to ensure their equal participation in the election process, both as voters and candidates.

‘’Adopt the law to ensure equal representation of both genders (50 percent) is one of the recommendations. Moreover, parties should be obliged to update and revise the party lists by replacing candidates respecting the gender requirement and ensuring that female candidates are replaced by women, and male candidates by men’’, explained from ENEMO.

To enhance transparency and public trust, it is recommended that all SEC sessions are broadcasted live and afterwards available on the SEC website.

Also, comprehensive guidelines on the criteria for the validity of individual signatures that include visual verification of signatures should be introduced to minimize the possibility of forged signatures and excessive discretionary power of the data entry clerks.

ENEMO recommends that State financing of regular work and pre-electoral campaigns of political parties should be legally conditioned by introducing into the statutes and implementing a democratic procedure of selection of candidates for members of Parliament, as well as direct selection of a party’s leadership by the members of that same party. The introduction of sub national districts should also be considered, in order to improve the process of accountability of elected MPs towards the constituents of the respective district.

ENEMO estimates that the Agency for the Prevention of Corruption and the Prosecutor's Office should establish closer cooperation and increase transparency, in order to ensure that cases of abuse or fraud are properly monitored, investigated and prosecuted.

‘’The institutional structure should be improved to ensure that prevention, oversight, investigation, prosecution and sanctioning are coordinated efforts in the struggle against political finance abuse’’, ENEMO pointed out.

They said the Agency for Electronic Media should publish media monitoring reports on a regular basis during the electoral period. This would not only increase media transparency, but also provide voters and other electoral with meaningful information on the media coverage of the campaign.

ENEMO recommends to revise and improve the procedure of handling the election-related complaints and appeals by all competent bodies they are submitted to.

The ENEMO IEOM on Parliamentary Elections in Montenegro was financially supported by the National Democratic Institute (NDI) and the National Endowment for Democracy (NED).

The Final Report in English can be downloaded on the following link: ENEMOFinalReportMontenegro.pdf

The Final Report in Montenegrin can be downloaded on the following link: MNEMontenegroParliamentaryElections2020.pdf