Briefing of short-term observers organized by ENEMO IEOM to Montenegro 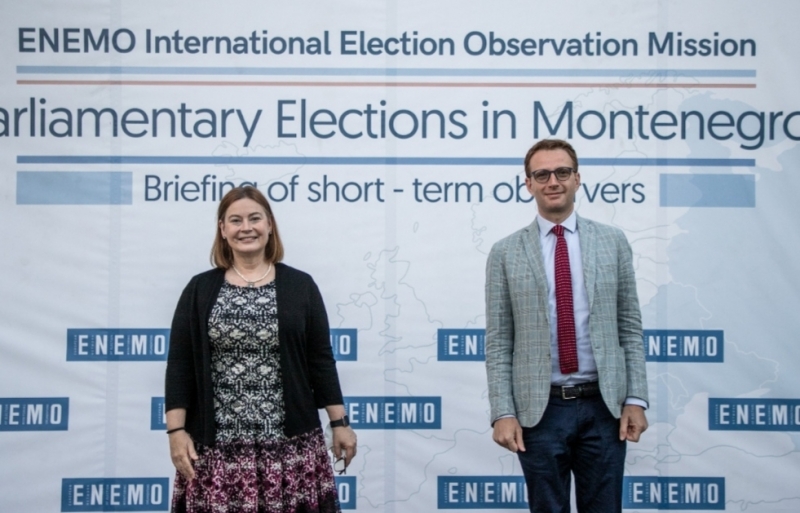 Budva, August 28th 2020 - Parliamentary elections in Montenegro are going to be held in a crucial moment for that country, and political and social turmoil, the economic crisis and COVID-19 represent a significant challenge for the entire system, said the Head of the ENEMO observation mission in Montenegro, Dr. Gianluca Passarelli.

‘’The Mission has started its activities at the beginning of July. Despite short deadlines and challenging circumstances under which we are operating, we are confident that the mission will be very successful, in line with previous missions of ENEMO.’’ said Passareli.

He also said that an interim report for the period from July 15th to August 15th has already been published and distributed to numerous addresses and that it has had a generally positive feedback from interlocutors.

"We held meetings with several ambassadors, with the leaders of almost all political parties, as well as with the representatives of the Government and agencies involved in the election process. Up until 15 August, ENEMO observers held a total of 237 meetings with electoral stakeholders. With great modesty I can say that no other organization has done so much” Passareli said.

That, as Passarelli explained, is not the end of their task.

"During election day, long-term and short-term observers will monitor hundreds of polling stations, and I will personally visit eight cities, as well as the prison of Podgorica" Passareli said.

He also said that the preliminary report will be presented soon after the election day, while the Final report is expected by the beginning of October.

"We are in Montenegro to contribute to improvement of the transparency of the election process, assess its integrity and compatibility with international standards and domestic legislation, as well as to provide recommendations for potential areas of improvements” said Passarelli.

U.S. Ambassador to Montenegro Ms. Judy Rising Reinke said that elections in Montenegro take place in one, historically observed, unusual environment, and that is the COVID 19 pandemic.

"I'm really amazed that you were willing to get on the plane, at this time in history and actually  risk your health to come and witness to something you sincerely and deeply believe in. You share my commitment to the importance of this mission” said Rising Reinke.

She also announced that the US Embassy is involved in observation missions as part of international efforts to monitor, observe and determine the credibility of election process and results.

“We are here to observe the process in order to monitor whether it is credible and inclusive and to ensure voter participation at all levels. We are not experts in this area like you, but we as the U.S. Embassy are trying to ensure that we have our "eyes and ears" on the field without affecting the results themselves, which, of course, you do as well” said Rising Reinke.

She expressed hope that voter turnout will be high, as she stated, not for political reasons, but because she cares that every individual in Montenegro, who has the right to vote, gets the opportunity to exercise this right.

"This is not a political statement, but an expression of my deep conviction that democracy is important at the individual level because voting is a right, but also a privilege and a duty, the same as each individual has the right, privilege and duty to stand for election or as political parties have the right to participate in the campaign" said Rising Reinke.

She pointed out that election monitoring is important not only to ensure presence, but also to enable the next phase of the process.

"Forming of the Parliament, let's hope without a boycott, where credible results, even to those who are in the minority, provide the belief that democratic processes function in practice, and that regardless of their values, these MPs are elected freely, fairly and with a democratically expressed will" concluded Rising Reinke.