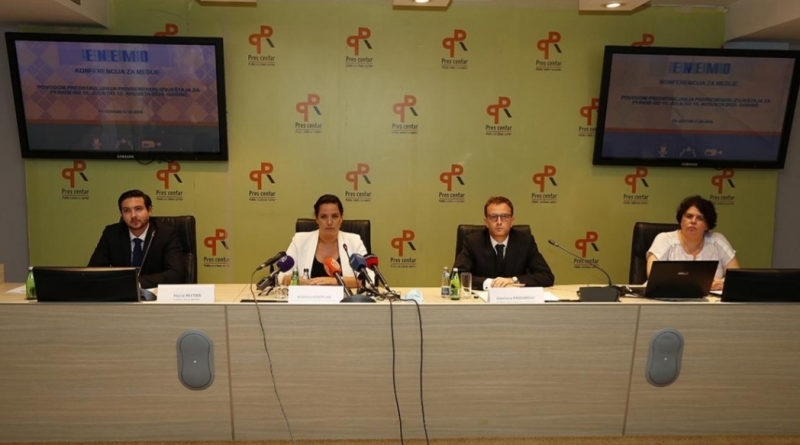 Podgorica, 17 August, 2020 –The European Network of Election Monitoring Organizations (ENEMO) presented its Interim report for the period 15 July – 15 August 2020. The press conference was held at the premises of the “PR Centar” in Podgorica.

The Head of ENEMO’s Mission, Dr. Gianluca Passarelli, presented the key conclusion of ENEMO’s Interim Report: “Overall, the domestic electoral legislation provides grounds for holding democratic elections in Montenegro. However, certain legal provisions remain at odds with international standards, including voters’ and candidates’ rights. The Covid-19 pandemic has negatively affected the conditions for holding parliamentary elections and opportunities for campaigning, while inconsistencies in the laws and lack of comprehensive regulations may confuse participants in the electoral process”.

“In general, the elections are administered professionally despite the lack of legal certainty regarding some aspects of the electoral process. The State Election Commission (SEC) operates in an overall transparent manner. Municipal Electoral Commissions (MECs) operate professionally and effectively, and seem to be prepared for the upcoming elections”, stated Deputy Head of Mission, Ms. Ana Mihajlovic.

“However, late changes by the SEC as well as lack of clarity regarding whether or not all groups of voters will have the opportunity to vote due to the Covid-19 pandemic may affect the quality of the electoral process. It remains unclear how trainings for Polling Boards’ (PBs) staff will be conducted and whether this will affect their readiness for the election day”, added Election Administration Analyst and SEC Observer, Ms. Kristina Kostelac.

Ms. Kristina Kostelac stated that: “Regarding voter registration, concerns should be raised that excessive provisions in the law on the right to vote could lead to the disenfranchisement of a considerable number of voters, in cases where they resided abroad and have only recently (less than two years) returned to Montenegro to renew their residency in the country. There is also a general perception that there are discrepancies between different databases that compile the voters’ list and the total population in the country aged 18 or higher”.

ENEMO notes that the two year residency requirement to stand for election should also be deemed as excessive and at odds with international standards. However, “All electoral lists were able to collect the required number of voter signatures and were registered by the SEC within the legal deadline, with the exception of the self-declared Yugoslav national minority list, even after lodging an appeal to the Constitutional Court”, said Ms. Kostelac. She added that “Even though all electoral lists complied with the gender quota requirement, only one national minority went beyond and included 70% of female candidates, while women remain underrepresented in Election Management Bodies (EMBs) and public life. Additionally, ENEMO notes that only one candidate list is led by a woman in these elections”.

Election Campaign Analyst, Mr. Pierre Peytier stated that: “Concerns should be raised regarding the lack of comprehensive regulations on indoor and outdoor campaign events and limitations on campaigning due to the Covid-19 epidemic. As a consequence, electoral contestants have increased the focus of their campaigns on social networks and online media. Both the epidemic itself and the corresponding health security measures adopted may affect the principle of equal opportunity and possibility for candidates and parties to campaign freely”.

The overall legal framework for media, including laws and the Constitution, generally provide for freedom of speech and freedom of the press. However, transparency regarding media ownership is limited and under regulated, in particular for online and social media.

“The appearance of state officials used as a means to increase the coverage of the lists in which they are running, outside the dedicated advertising blocks raises concerns, as it may affect the principle of equality of opportunity, as well as the obligation of impartiality in the media coverage of the electoral campaign”, said Mr. Peytier.

Limitations in the legal framework on campaigning of state officials, potential abuse of office, and avoiding blurring of lines between parties and State are overall in line with international standards. “However, reports of ENEMO observers indicate considerable allegations of pressure towards public-sector employees, threats of non-renewal of contracts, blocking professional advancement, pressure on employees’ families, and threats of demotion in cases of employees refusing to support the ruling coalition. On the other hand, allegations of promises of employment or services as means of indirect vote buying were reported to ENEMO observers in several instances”, he added.

The 2020 amended legislation has brought the framework for campaign finance overall more in line with international standards, and generally complies with GRECO anti-corruption standards. The role of the Agency for the Prevention of Corruption (APC) and its mandate have been extended to provide effective oversight of campaign finance. “ENEMO deems positive the plan published by the APC for controlling and monitoring the financing of political campaigns for these elections. However,  concerns should be raised regarding the difficulty of implementing field controls and supervising possible cases of misusing public funds or human resources, due to lack of capacity and limited possibilities to prevent or eliminate abuse”, stated Mr. Peytier.

The legal framework does provides for a single hierarchical structure of dispute resolution excluding parallel handling of complaints. The same complaint cannot be submitted to different instances. Based on the information received to date, ENEMO deems that contestants have an overall adequate understanding of the complaints and appeals process and deadlines. However, reportedly, stakeholders often refrain from lodging electoral complaints due to a lack of trust in institutions.

ENEMO’s international election observation mission for the 30 August 2020 Parliamentary Elections in Montenegro is financially supported by the National Democratic Institute and the National Endowment for Democracy. The content of the document is the sole responsibility of ENEMO and does not necessarily represent the position of the donors.

Full Interim Report in English language can be downloaded on the link below:

Full Interim Report in Montenegrin language can be downloaded on the link below: