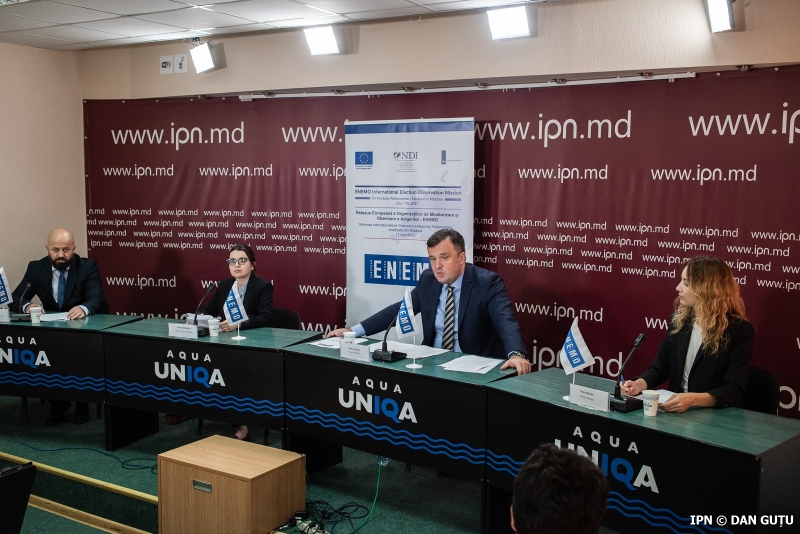 Chisinau, 12 July 2021 - The European Network of Election Monitoring Organizations (ENEMO) - ENEMO preliminarily assesses that the electoral process, including the Election Day, was conducted mostly in line with international standards. Elections were administered efficiently and in a transparent manner by the electoral administration, although some of the most important CEC decisions put into question the impartiality of some of its members. The campaign was competitive but marred by a number of alleged violations including misuse of administrative resources, illegal financing, and vote-buying. The polarized and largely biased media landscape, as well as the dissemination of false information, have limited the range of political views presented to voters. Delays in complaints adjudication as well as inconsistent decisions on key aspects of the electoral process additionally affected legal certainty, said Mr. Zlatko Vujovic, Head of the ENEMO Mission to Moldova for Early Parliamentary Elections of 11 July.

The 11 July 2021 early parliamentary elections were generally competitive and fundamental rights were respected overall. Election Day was held in a calm environment, despite some irregularities observed which did not affect the legitimacy of the process.

The electoral legislation can guarantee the conduct of fair and democratic elections in accordance with international standards. However, due to problems revealed in practice caused by insufficient or unclear regulations, ENEMO assesses that the existing regulations remain to be amended, in order to avoid controversial interpretations and ensure a competitive and fair electoral environment.

As Mr. Elidon Lamani, Election Analyst/CEC Observer stated: “While the conduct of the electoral process by the CEC has been generally assessed by most interlocutors as professional and transparent, several interlocutors voiced concerns that in specific cases, the CEC decision-making process was politically motivated. Concerns were related to the decisions pertaining to the establishment of polling stations for voters abroad and from the left bank of Dniester river, as well as to the failure to adopt a decision on the organized transportation of voters on Election Day.”

The legal provisions related to electoral campaigning enshrined in the Electoral Code are mostly in line with international standards. However, a number of standing issues in the electoral legislation remain, inter alia leaving space for early campaigning, uneven timeframes for candidate registration and start of the campaigns (affecting equality of opportunity), and excessive bans on use of state symbols and images (affecting freedom of expression).

Radical statements and intolerant messages damaged the image of the campaign, with some of these messages containing discriminatory or inflammatory language. The campaign environment was additionally marred by negative campaigning and accusations of corruption.

According to Ms. Maja Milikic, Media Analyst: “Overall the media landscape in Moldova is pluralistic, but polarized with a lack of independence from political interests. Social media played a more important role than ever, which also gave rise to several issues, including “fake news” and fake polls with a possible influence on election results. In addition, there is a lack of oversight of campaign and media reporting related to elections.  The Audiovisual Council (AC) responsible for monitoring the implementation of provisions on election campaigns in the media, has not effectively performed and was unable to apply swift sanctions to broadcasters that violated the legal framework, and did not submit to the CEC, two days prior to Election Day, the summary report on monitoring the conduct of the media during the campaign.”

“The right to file complaints is guaranteed by the legislation. Though, as adjudication of complaints proved those regulations need further elaboration and improvement as they do not ensure the right to effective remedy. There were a number of problems revealed in practice, such as the delayed examination of complaints and long timeframes, misunderstanding over the competent authority for adjudicating complaints and procedures to be followed, as well as the right to submit complaints. Subsequently, the lack of clarity resulted in protracted adjudication and delayed resolution of some of the electoral disputes. This practice can damage the integrity of the electoral process and also raise questions about the impartiality of the respective competent authority especially when it comes to crucial electoral issues”, said Ms. Elene Nizharadze, Deputy Head of Mission.

Statement of Preliminary Findings and Conclusion in English can be downloaded here: ENEMOStatementofPreliminaryFindingsandConclusionsMoldovaEarlyParliamentaryElectionsJuly2021.pdf

Statement of Preliminary Findings and Conclusion in Romanian can be downloaded here:Rom_ENEMOPreliminaryStatement.docx

ENEMO’s international observation mission for the 11 July 2021 Early Parliamentary Elections in Moldova is financially supported by the Delegation of the European Union, the Kingdom of the Netherlands and the National Democratic Institute. The content of the document is the sole responsibility of ENEMO and does not necessarily represent the position of the donors.