ENEMO International Election Observation Mission (IEOM) to Moldova for the Parliamentary Elections of 24 February 2019 will organize the second press conference on Tuesday, 26 February 2019 at 11 AM 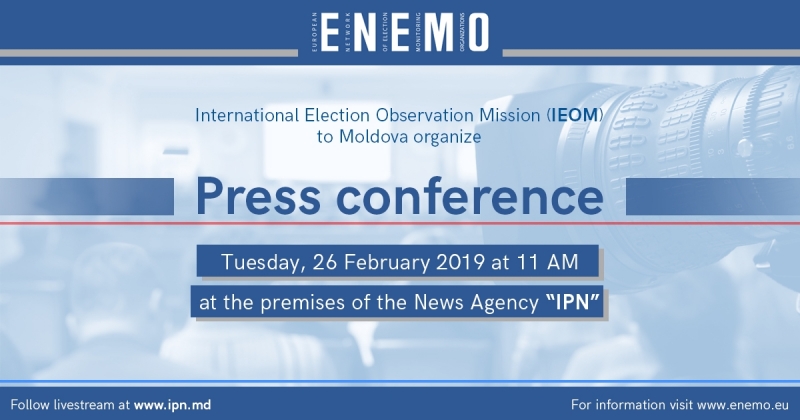 ENEMO (the European Network of Election Monitoring Organizations) International Election Observation Mission (IEOM) to Moldova for the Parliamentary Elections of 24 February 2019 will organize the second press conference on Tuesday, 26 February 2019 at 11 AM, at the premises of the News Agency “IPN” (Casa Presei, str. Puşkin 22, Chisinau).

The aim of the Press Conference is to present the Preliminary Findings and Conclusions of the Mission on the 24 February Parliamentary Elections. Since its deployment, the Mission has been monitoring and assessing the overall political and electoral environment, conduct of election management bodies, respect of the rights to elect and stand for elections, election campaigning, electoral dispute resolutions and other crucial aspects of the process. On Election Day, eight teams of observers, in pairs of two, will observe the opening, voting, counting and tabulation of results, as well as environment around polling stations, with special attention to campaign activities to be held during it.

Speakers during the Press Conference will be:

ENEMO IEOM to Moldova for the 24 February 2019 Parliamentary Elections is supported by the Embassy of the Kingdom of the Netherlands; Sweden; the National Endowment Foundation of US Congress, through National Democratic Institute; and the European Union.