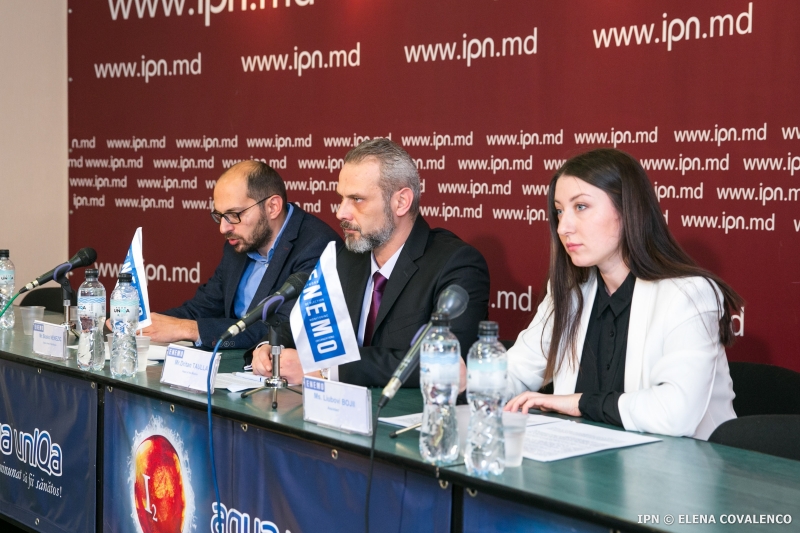 Chisinau, February 26 - Election Day in Moldova was generally calm and ENEMO observers reported sporadic procedural mistakes and ambiguities, mostly due to latest amendments and procedures introduced, such as electoral campaigning on Election Day, the use of cameras, and holding of the referendum on the same day as elections.

This was concluded on the last press conference of ENEMO International election observation Mission (IEOM) in Moldova.

Head of the Mission, Dritan Taulla, said that the electoral campaign was intense, especially as the Election Day approached, with a high number of personal accusations between contestants, often resulting with formal complaints to the CEC and Courts.

“Main messages of the campaign were about domestic topics, especially related to economy and anti-corruption, whereas some candidates in single mandate constituencies campaigned on matters that are of competence of local administration”, explained Taulla.

He said that the misuse of administrative resources, pressure on state employees and allegations of vote buying were stated by many interlocutors, whereas third-party involvement in campaigning was even recognized by the CEC.

He explained that the 2,141 polling stations were established for these elections, 123 of which for voters residing abroad and 47 for voters from the left bank of the River Dniester.

“Election Day was generally calm and procedural elements of the process were conducted in a professional manner by PEBs. ENEMO observers reported sporadic procedural mistakes and ambiguities during the Election Day, mostly due to latest amendments and procedures introduced, such as electoral campaigning on Election Day, the use of cameras, and holding of the referendum on the same day as elections. Most PSs observed were not fully accessible to voters with mobility impairments”, said Taulla.

He also stated that ENEMO observed the widespread organized transportation of voters from the Left bank of the Dniester River, whereas allegations of vote buying were also reported by different electoral stakeholders to the authorities, and are being investigated.

Deputy Head of the Mission, Bosko Nenezić, said that the conduct of CEC in the aspects observed has been mostly efficient and transparent.

“The sessions of the CEC were open to media and observers, as well to the public through online streaming. Decisions of the CEC were, generally, posted online in a timely manner. On Election Day, the CEC has provided periodic information on the process and turnout and, after the closing of the polls, has posted preliminary results online, which contributed to the transparency of the process”, said Nenezić.

He said that the constituency electoral commissions were formed in time and despite occasional changes in their composition, most CoECs have conducted their duties timely and they have shown a high level of cooperation with ENEMO observers. Women were well represented as CoEC members, with more than 55%.

“ENEMO notes that publication of decisions of some CoECs was untimely, with many decisions still not published”, explained Nenezić.

As he mentioned, “besides the 15 contestants registered for the national constituency, another 325 candidates participated in elections in single mandate constituencies, with several candidates being granted the right to stand for election as late as few days before Election Day, which significantly impacted their possibility to equally campaign”, said Nenezić.

Following an invitation of the Central Election Commission of Moldova, ENEMO has deployed an International Election Observation Mission to observe the 24 February 2019 Parliamentary Elections. The Mission is composed of a Core Team of eight international experts, based in Chisinau, and ten long-term observers, deployed in five multinational teams of two, throughout the country.

The Core Team has been established since the beginning of the election period, and the long-term observers have been deployed on 10 January 2019. Since its deployment, the Mission has monitored and assessed the overall environment in which elections are being held, performance of election management bodies, the candidate registration process, the electoral campaign, Election Day and other aspects of the process. The EOM is assessing the electoral process for compatibility with international benchmarks and standards for democratic elections, and the legal framework of the Republic of Moldova.

On Election Day, eight teams of two observers monitored the opening, voting, counting and tabulation of results, transfer to CoECs, as well as environment inside and around polling stations and campaigning in Moldova, whereas additional 3 teams observed Election Day in PS abroad. In total, ENEMO observed 115 PS (112 in Moldova and 3 abroad).

The Election Observation Mission of ENEMO to Moldova for the 2019 Parliamentary Elections is financially supported by the Embassy of the Kingdom of the Netherlands; Sweden; the National Endowment Foundation of the US Congress, through the National Democratic Institute; and the European Union.

You can download the Preliminary conclusions and findings in the English language here: Statement of Preliminary Findings and Conclusions.pdf