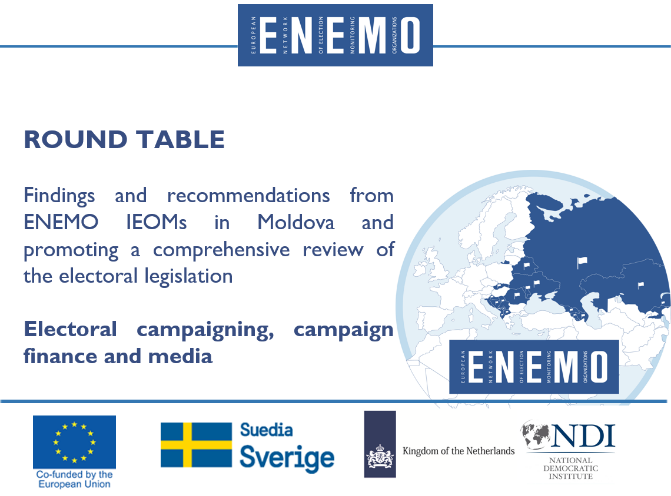 On 26 February 2020, ENEMO held a round table event in Chisinau gathering 40 participants, among which the Head and Deputy Heads of ENEMO's Observation Missions to Parliamentary and Local Elections in Moldova in 2019. In addition to election experts from the network engaged in observing elections in Moldova, the event also gathered the Head the Central Electoral Commission of Moldova, the former Prime Minister of Moldova,  local CSOs including ENEMO partner Promo-LEX, other NGOs, and media.  Additionally, the opening panel hosted high representatives of the diplomatic corps of Moldova, including the EU Delegation in Moldova, the Embassy of Sweden, the Embassy of the Netherlands, and the National Democratic Institute, which have financially supported ENEMO's missions in Moldova last year along with the network's goal to promote electoral reform.

After observing all of the last three general elections in Moldova (Presidential 2016, Parliamentary 2019 and Local 2019) and following political, social and legislative developments in the country for the last three years and a half, ENEMO noted that many of the observed shortcomings remain in place, and several proposed recommendations are still to be addressed. In order to increase the impact of its work in Moldova, ENEMO deemed that findings and recommendations from the last mission and previous missions should be delivered directly to the interested stakeholders and discussed with them at an event.

ENEMO strongly believes that a comprehensive and inclusive electoral reform should be conducted in Moldova, and wanted to use the opportunity of the event to convey key findings, assessment, and recommendations to key stakeholders, initiate discussion amongst them, as well as advocate for electoral reform. The event provided a platform for ENEMO to present and discuss findings and recommendations not only from the last Election Observation Mission, for the 2019 Local Elections, but also from previous ENEMO missions. The findings, assessment, and recommendations provided by ENEMO served as a basis to foster an inclusive and meaningful dialogue on necessary legal amendments and institutional steps aimed at addressing the most pressing shortcomings ahead of the 2020 Presidential elections, but particularly on a long-term sustainable plan to conduct a comprehensive electoral reform.

At the event, ENEMO presented its key findings and recommendations from its observations last year during Parliamentary and Local Elections, but also from previous Presidential Elections in the country. This was followed by several discussion sessions engaging participants, and allowing ENEMO to promote a comprehensive overhaul of the electoral legislation through meaningful dialogue.

In light of the upcoming Moldovan Presidential Elections 2020, the event was highlighted by stakeholders present as an essential and successful step in furthering ENEMO's objective to advocate in favor of comprehensive, transparent and inclusive electoral reform in the country.

In the opening session of the event, Dritan Taulla, Head of ENEMO IEOMs to Parliamentary and Local Elections 2019, emphasized the importance of inclusive dialogue in favor of a comprehensive and transparent electoral reform in Moldova in his speech: “The Moldovan legal framework for elections needs a thorough and comprehensive review. That does not mean only the Electoral Code, but all related legislation. But we went even further than that in our recommendations, and we said that for this reform, besides being comprehensive to tackle many small and big technical and political matters, the most important aspect for ENEMO was that the reform should be also inclusive and transparent.”

He also added: “It is very important to have all political parties onboard, not only the ones that are currently represented in the Parliament, but even parties that at the current moment do not have representation. Not only, but it is very important to include also civil society in this process, NGOs that are observing elections or different aspects of the elections. This recommendation was repeated by ENEMO in all elections, and in the last one was put as the main recommendation. Besides issuing the final report for the last elections, we decided to hold this event, to talk here about the upcoming electoral reform in Moldova, which in our view should be comprehensive, inclusive, and totally transparent, and should be done well ahead of time. “

The opening panel also hosted speeches from the Chairman of the CEC, Mr.Dorin Cimil; the Ambassador of Sweden, H.E Anna Lyberg; as well as the Head of Operations of the EU Delegation in Moldova, Mr.Marco Gemmer; Resident Director of NDI, Mr. Andrew Young; and President of the Promo-LEX Association, Mr. Ion Manole. They all emphasized the importance of the event and of ENEMO’s work in the country, and supported the electoral reform.

Mr.Dorin Cimil from the CEC thanked ENEMO for their work in Moldova regarding elections, and highlighted the quality and pertinence of the observations and recommendations formulated by ENEMO’s missions. He also thanked the participants for their presence, and welcomed the presence of many international and domestic stakeholders.

Panelists also spoke about the progress in terms of accountability and transparency of elections in Moldova, as well as the voting rights of Moldovan citizens. At the same time, speakers evoked the complexity and volatility of elections in the country.

Ambassador Lyberg said: “We are today proud to see that results from the support given also lasted in time, and contributed to what we can see today: that the elections are better organized, their transparency and accountability is better, and also that citizens can better enjoy their voting rights, according to international standards. However, we also see that the electoral processes in Moldova are somewhat complex and volatile. I am sure that today ENEMO will break down the key findings and conclusions on how the current electoral legislation and the electoral framework is struggling to meet voter’s needs, politicians decisions and international electoral standards. And it is a challenging task, for which a broad engagement matters and realistic solutions should be identified, so that the electoral legislation can guarantee free and impartial elections, as a crucial pillar for a democracy.”

Mr.Gemmer from the EU Delegation added: “I would like to thank ENEMO for being so engaged in election monitoring here in the Republic of Moldova. Only by your initiative was it possible for Sweden, the Netherlands and the European Union to support you in doing that. Thank you for your engagement, for what you are doing, here but also in many other countries. Your work is very famous, because we rely on your recommendations, because only with very sound recommendations are we able to sit together, to discuss together what can be done”.

Mr. Andrew Young from the NDI also thanked ENEMO and welcomed the participants at the event: “Thank you very much to you and your team for your continued professional advice to countries across the world on election reform. I think it is really important that everyone here listen’s to you, {...} because the views that really matter are those of you who have been out in the field, that are experts in your field specifically, are neutral, and who actually help deliver the right results. And that’s people like ENEMO, including people like Promo-LEX as well. “

Local NGO and ENEMO member organization Promo-LEX echoed these speeches, with Mr. Ion Manole speaking in support of the network and highlighting the very positive cooperation between ENEMO observers and Promo-LEX observers in Moldova and other countries.

Discussions allowed participants to exchange and intervene on problematic issues, building upon the content of the presentations delivered and advocated recommendations. Overall, the event reached its objective to include election stakeholders across the spectrum to engage in discussing necessary improvements for elections in Moldova. ENEMO will continue to follow up on legal amendments and evolutions of the electoral reform in the country, in light of upcoming Presidential Elections 2020.

For more information on ENEMO’s findings and recommendations, please consult the final reports sections for the missions in Moldova.