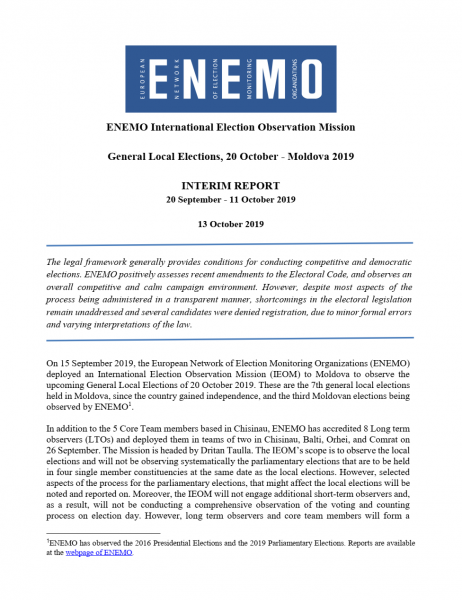 Chisinau, October 13, 2019 - The legal framework generally provides the conditions for conducting competitive and democratic elections. ENEMO positively assesses recent amendments to the Electoral Code, and observed an overall competitive and calm campaign environment. However, despite most aspects of the process being administered in a transparent manner, shortcomings in the electoral legislation remain unaddressed and several candidates were denied registration due to minor formal errors and varying interpretations of the law.

This was concluded in the First Interim report for the period 20 September - 11 October 2019, published by ENEMO International Election Observation Mission (IEOM) to Moldova.

“Overall, the legal framework, if implemented in good faith, ensures the conditions for holding of democratic elections. A number of loopholes and shortcomings in the electoral law were addressed through legal amendments adopted in August 2019. The recent amendments clarify ambiguities in the law, bring the legislation more in line with international standards and best practices for democratic elections, and fulfill previous ENEMO and other international and domestic stakeholders’ recommendations”, states the report.

However, it should be noted that adopting them slightly more than two months before the election day is not a good practice, as it affects the stability of the law, while also placing additional burden on the election administration bodies and, potentially, creating confusion among electoral stakeholders.

Furthermore, the report quotes: “Procedural conditions and legal framework are assessed as suitable for all levels of the electoral administration to impartially manage the upcoming elections. The CEC sessions were generally conducted in a collegial, open and transparent manner. The CEC published the agenda of the upcoming sessions in advance and provided draft decisions upon request”.

However, ENEMO raises concerns regarding the considerable number of replacements of electoral commission members, with the process of appointing new members still ongoing.

“ENEMO notes that the process of collection of signatures by independent candidates was problematic in a number of cases. Due to discrepancies in the legal interpretation of the provisions of the electoral law, DECs rejected a number of candidate applications, which led to several court disputes and appeals of first instance court decisions”, states the report.

According to ENEMO observers, no significant concerns need to be raised regarding the accuracy and reliability of the voter lists. However, in some cases, voter registration offices seemed understaffed and voiced the need for harmonizing and simplifying voter registration procedures. Observers also noted potential issues regarding the presence of deceased voters still in the lists.

“Campaigning has been low-key over the observed period, with variations in visibility depending on regions. The electoral environment can be assessed as peaceful and calm, with candidates able to campaign freely overall. However, some provisions on campaigning in the Electoral Code are disproportionately restrictive and at odds with international standards”, reads the report.

Although the framework and requirements for campaign finance are overall in line with the Venice Commission and GRECO recommendations, ENEMO observed a lack of effective oversight mechanisms and systematic verification by the CEC for discrepancies between reported amounts and campaigning conducted by electoral contestants.

Additionally, the report states: “As of 11 October, the CEC received 22 complaints, considered 18 and issued a formal decision on six of them. Overall, the CEC processed complaints in a timely and transparent manner. The EOM has been informed of at least 15 complaints filed with lower-level election management bodies, mostly about candidate registration”.

ENEMO notes that a number of DECs registered party lists that, at the time of submission and acceptance, did not fulfill the gender quota for the local councils.

Full Interim Report in English language can be downloaded on the link below:

DISCLAIMER: ENEMO’s international observation mission for Moldovan Local Election 2019 is financially supported by the European Union, Sweden and the Kingdom of the Netherlands. The content of the document is the sole responsibility of ENEMO and does not necessarily represent the position of the donors.