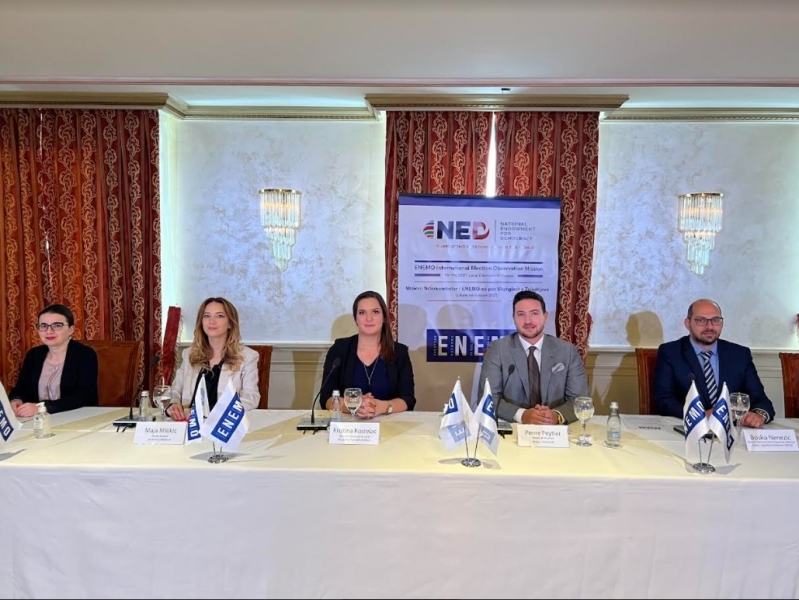 Pristina, 15 November 2021 - The European Network of Election Monitoring Organizations (ENEMO) – “ENEMO preliminarily assesses that the voting process for the mayoral run-offs was overall well administered by the election administration. Despite a limited timeframe for campaigning and an increase in harsh rhetoric in between the two rounds, mayoral candidates were generally able to campaign freely and in a competitive environment. Numerous inconsistencies in election results of the first round led to a lengthy and complex process of recounting in between the two rounds, which may have affected public trust in the results, particularly for municipal assemblies”, said Pierre Peytier, Head of the Mission to Kosovo for Local Elections of 2021.

Based on the selected few polling stations observed by the mission and media reports during the Election Day, the voting process was overall orderly, without major incidents and election commission members seemed to be managing the process well. According to preliminary data announced by the CEC, the turnout in the second round of municipal elections was 37,85 percent.

“The Central Election Commission (CEC) prepared the second round of mayoral elections in a timely and efficient manner. However, the level of transparency of the CEC decreased during this period, as important information was not made available to the public. The conduct and transparency of the Counting and Result Center (CRC) has greatly improved since previous elections observed by ENEMO, yet the verification and recounting process conducted by this body was extremely complex and burdensome, lasting almost the entire period between the two rounds of elections, thus complicating the observation of its work,” said Bosko Nenezic, ENEMO’s Election Administration/CEC Observer.

According to Kristina Kostelac, Election Campaign Analyst “ENEMO notes that numerous shortcomings in the legislative framework in terms of political and campaign finance remain one of the key election related issues in Kosovo. Additionally, the auditing process of political entities’ financial reports indicates withstanding shortcomings along with a complete lack of political will to ensure transparent financial reporting. The recent auditing process faced numerous challenges, including the excessive retrogradeness of the process that minimized the accuracy of the audit. The report indicates numerous issues, such as hidden and unreported expenses of political entities that are often incurred through separate unreported bank accounts, in cash or in return for certain services. This leaves space for financial manipulation and deprives voters and the general public from financial transparency of political entities”.

“The media continued to report freely and there were no major incidents mentioned to ENEMO affecting their independence to report. They were able to provide fair coverage for the mayoral run-offs through news coverage, interviews, TV debate programs and political advertisements and thus managed to keep voters informed about the electoral process. ENEMO noted ongoing shortcomings related to online and social media monitoring, in particular identifying possible costs involving paid advertising and their sources. Overall, the Independent Media Commission (IMC) was operating within the legal framework and was notifying TV channels which violated regulations during the campaign. Compared to the first round of elections, where the IMC was not effective in applying timely sanctions to those broadcasters, for the second round of elections, prior to Election Day, the IMC sanctioned six television stations for violating the legislation,” stated Maja Milikic, Media Analyst.

Since the start of the election period Elections Complaints and Appeals Panel (ECAP) received over 1,000 complaints which were adjudicated within the established timeframes. ENEMO reiterates that the existing deadlines for filing and adjudicating complaints are unreasonably limited, which does not ensure the right to effective legal remedy. Legislation regulating election dispute resolution has many loopholes enabling different interpretations. Due to insufficient legal provisions, some of the issues are regulated in practice, which can create additional ambiguity.

ENEMO’s international observation mission for the 2021 Local Elections in Kosovo is financially supported by the National Endowment for Democracy (NED). The content of the document is the sole responsibility of ENEMO and does not necessarily represent the position of the donor.

Statement of Preliminary Findings and Conclusions in English can be downloaded here: ENEMOStatementofPreliminaryFindingsandConclusionsIIround.pdf

Statement of Preliminary Findings and Conclusions in Albanian can be downloaded here: ENEMO-PreliminaryStatementinAlbanianSecondRound.pdf