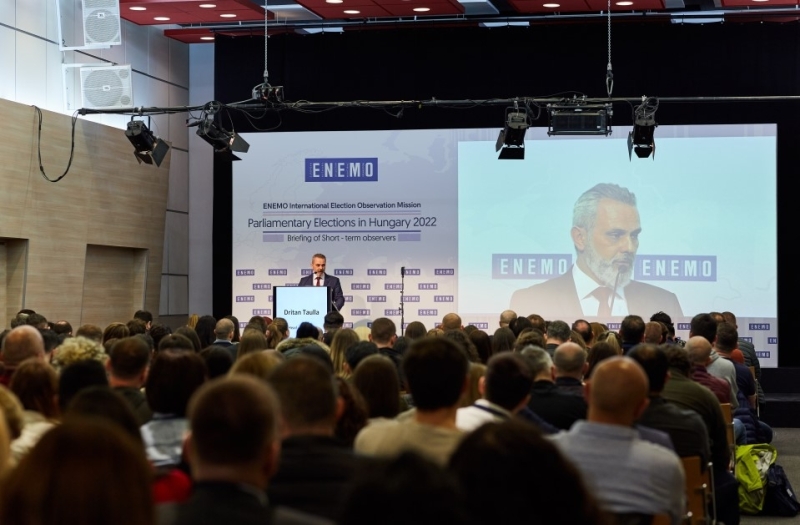 Budapest, 1 April 2022 - The European Network of Election Monitoring Organizations (ENEMO) briefed the 200 short-term observers who will be deployed throughout Hungary on April 3rd to monitor the opening of polling stations, voting, counting and tabulation of results on Election Day. The shortterm observers joined the previously deployed team of the International Election Observation Mission (IEOM) of ENEMO, composed of seven core team members and ten long-long term observers. ENEMO’s IEOM started its observation of the Parliamentary Elections and Referendum to be held this Sunday, at the beginning of February.

The Mission is monitoring and assessing the overall political and electoral environment, conduct of election management bodies, campaigning, gender equity, voting and tabulation processes, electoral dispute resolutions and other crucial aspects of the process.

“We are in Hungary to improve the transparency of the election process, assess its integrity and compatibility with international standards and domestic legislation, as well as provide recommendations for potential areas of improvement.” - said Dritan Taulla, Head of the IEOM of ENEMO. “We strongly hope that we will be able to build a constructive relationship with Hungarian authorities, as is the case in many of the countries where we have previously observed, and that our recommendations will help improve the integrity of elections.” - continued Taulla.

“ENEMO has a huge network of activists, human right defenders as well as dissidents who are fighting for living in freedom and democracy. All of them today are not with us. Many of them are passing through difficult times. But in the most difficult situation are our friends from Ukraine. I am happy that at least some of our friends and colleagues from Ukraine succeeded to join us these days in Hungary as part of our mission.” - said Zlatko Vujovic, Secretary General of ENEMO. “ These elections will be a test for further democratization of Hungary but also for ENEMO observing the EU. “ - added Vujovic.

The IEOM of ENEMO to Hungary has already published an Interim Report with its key findings on 21 March and is presenting its Statement of Preliminary Findings and Conclusions on Monday, 4 April 2022, at the Bank Center. A Final Report, complete with recommendations on potential areas of improvement, will follow some two months after the elections.

ENEMO’s International Election Observation Mission for the 3 April 2022 Parliamentary Elections in Hungary is financially supported by the National Endowment for Democracy (NED). Opinions expressed on this event are the sole responsibility of ENEMO and do not necessarily represent the position of the donor. The English version of this press release is the only official version.