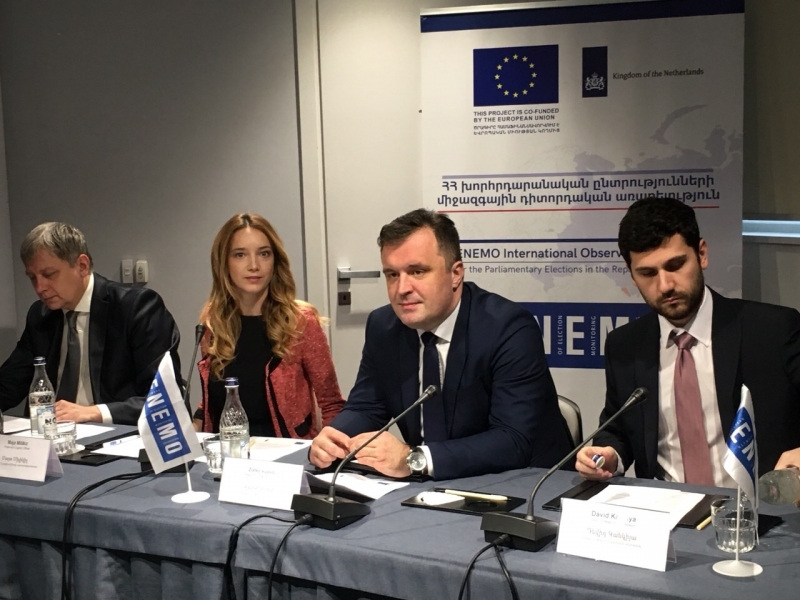 Yerevan, December 10, 2018 - During the press-conference held at Double Tree by Hilton Hotel, the European Network of Election Monitoring Organizations (ENEMO) presented its preliminary findings and conclusions.

Head of the ENEMO mission, Mr. Zlatko Vujovic stated: “Early parliamentary elections were held in a peaceful environment and in line with most international standards and national legislation. Voters had variety of candidates on their disposal who were able to campaign freely. Electoral day was generally orderly with occasional breaches of the established procedure by a number of PEC members, mainly due to lack of information about certain procedures.  The Central Election Commission (CEC) worked in a timely and efficient manner. However, unfinished electoral reform as well as lack of education of the voters leaves space for concern”.

He added that the current electoral administration performance is fully depending on political will of the central state authority. “The election campaign has been assessed as low intensity, free and without major restrictions. The use of hate speech and focusing on mutual accusation between candidates rather that discussing political agendas and programs – were some of the most distinguishing of this campaigning process” pointed out Mr. Vujovic.

The CEC’s performance during the campaign period and on the Election Day was assessed as efficient and transparent. According to the ENEMO assessments, the majority of TEC and PEC members have been adequately trained to fulfill their tasks and duties. “ENEMO EOM observed that there was a high level of women representation at PECs” stated Mr. Zlatko Vujovic, Head of the Mission.

According to the reports made by ENEMO LTO and STO teams, the low levels of voter education on election procedures and processes remains one of the lingering issues which needs to be addressed with major attention through campaigns organized by the CEC, NGOs and other relevant institutions.

Deputy Head of the mission, Mr. David Kankiia stated: “The mobile (home) voting procedure is restricted and is available only for those who are staying in medical institutions on the Election Day. Moreover, ENEMO acknowledges that this type of voting entails some privacy issues and could potentially be used to influence and pressure the voters”.

ENEMO notes that the use of video observation system is an important asset which can ensure both increase of public trust in and transparency of the electoral procedure. Mr. Kankiia added: “There are some technical issues which need to be addressed more carefully such as: the improvement of Internet connection and broadcasting quality; placement and number of cameras covering the PS; inclusion of the audio stream would provide better observation of the electoral processes and better understanding of specific situations”.

ENEMO EOM has not received any major complaints regarding the accuracy of voters’ list. The voters had a chance to request changes to the voters’ list till November 29, and according to this update there were 3.333 less voters registered for this election. The current number is 2.573.779 while before elections it was 2.577.112, explained legal expert, Oleg Reut. The low turnout of the voters implies an imperative need of both assessing and enhancing accuracy of the voter registry as well as conducting campaigns aimed at improving voters’ education and participation.

Ms. Maja Milikic, Press and Logistic Officer the ENEMO Mission to Armenia stated: “ENEMO started its work in Armenia at the beginning of November. During the Election day on 09th December, ENEMO deployed 8 Long Term observers and 50 Short Term observers that monitored the opening of 30 PECs, voting in over 310 PECs and closing of 30 PECs. Also, through video observation ENEMO's video observers folowed procedure in 283 PECs.”

ENEMO’s International Observation Mission to Armenia 2018 is funded by the European Union and Kingdom of the Netherlands.

You can download the Statement of preliminary findings here: StatementofPreliminaryFindingsandConclusions10Dec.pdf