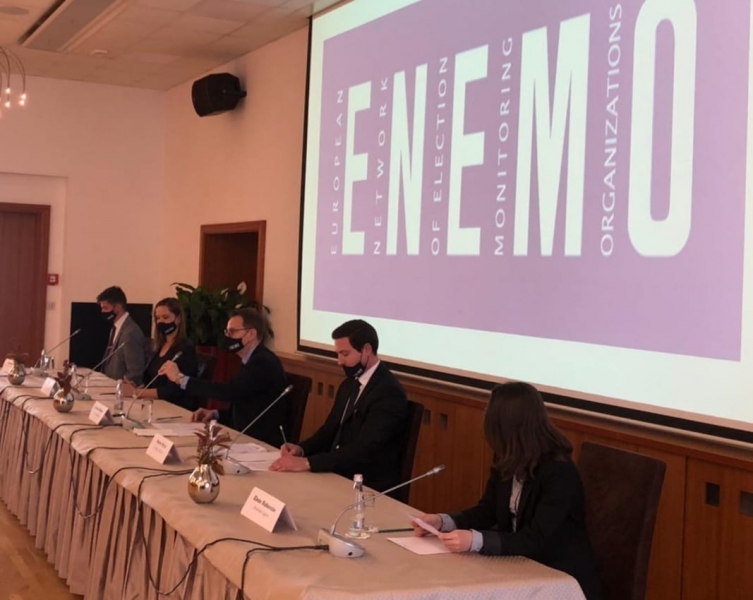 Tirana, 26 April, 2021 – “The European Network of Election Monitoring Organizations (ENEMO) assesses the electoral amendments introduced in 2020 as a step forward in harmonizing the legislation with international standards. However, the 2021 Parliamentary elections took place in a highly polarized and tense political and campaign environment, despite the efforts to ensure proper conduct of the polls. ENEMO raises concern over alarming cases of violence few days before and on Election Day. At odds with the Law, a significant number of voters, mainly citizens living abroad and hospitalized patients, were deprived of their right to vote”, said Dr. Gianluca Passarelli, Head of the ENEMO Mission to Albania at the press conference held at Rogner Hotel.

The mission has been following preparations for the conduct of the 25 April parliamentary elections since March 29. On Election Day, the mission observed voting at selected polling stations in the capital Tirana, but also in the cities of Elbasan, Durrës, and Kamëz.

He added: “Voting on Election Day was overall orderly and election commission members seemed to be managing the process well. However, in some cases Voting Center Commission (VCC) members seemed to lack proper knowledge of the procedures. Despite the high presence of police forces deployed to ensure security on Election Day, concerns should be raised regarding cases of violence, disruption to public order, allegations of vote-buying, violation of the secrecy of the vote or family voting reported by the media. These cases should be properly investigated by the state authorities and prosecuted if necessary”.

The 2021 Parliamentary elections were conducted within the framework of new amendments to the electoral legislation adopted on 23 July and 5 October, 2020. Amendments concerned a wide range of issues such as election administration, campaign funding, abuse of state resources, voting by citizens living abroad, election dispute resolution, etc.

“Introducing preferential voting enabled citizens to vote for their preferred candidate. However, the established threshold of preferential votes needed to be received by candidates to be able to affect the ranking on the candidates’ list reduced the impact of the amendment. Additionally, the possibility for leaders of the party to run in up to four districts compared to other candidates who may run only in one district created more opportunities for them. Differentiated treatment of candidates is not justified”, said Legal Analyst Mrs. Elene Nizharadze.

Overall, ENEMO assesses the work of the CEC as transparent and informative to the public. Decisions were made in a collegial manner among the same-level bodies within the CEC, with the exception of the State Election Commissioner which makes decisions independently. Deadlines were mostly followed, while no publicly available electoral calendar was prepared to increase transparency and accountability, in terms of following the legal deadlines and the overall timeline for election preparations. ENEMO notes that the inclusion of former political officials and cabinet officials creates potential space for additional politicization of the CEC.

Mrs. Kristina Kostelac, Election Administration Analyst/CEC Observer stated: “ENEMO welcomes the adoption of relevant bylaws by the CEC that enabled the use of new technologies, including the Electronic Voter Identification System (EVIS) and pilot projects of electronic voting and counting. ENEMO notes that the voter education materials presented on the CEC website are limited and mostly quote the articles of the Electoral Code. Additional concerns were raised in terms of numerous changes of the voting center locations close to the Election Day, which led to confusion of voters and could have potentially discouraged a number of voters from participating in the elections.”

When it comes to voters’ rights, she added: “ENEMO notes that the right of voters residing abroad should have been guaranteed, while the CEC should have drafted all sub-legal acts and ensured the conditions to enable out-of-country voting, despite the limited timeframe. Moreover, ENEMO condemns the complete lack of political will to enable voting for COVID-positive and self-isolated citizens, in addition to other hospitalized voters, since no special polling units at health institutions were established. This approach is in contrast to international standards, as well as the Electoral Code."

Mr. Pierre Peytier, Deputy Head of Mission said: “ENEMO observed a highly tense campaign environment, marred by accusations and inflammatory language among candidates, as well as cases of physical altercations among various party supporters. The campaign lacked moderation and was marred by serious allegations of affiliations of electoral contestants to organized crime and corruption, vote buying, pressure on state employees, voter intimidation and “state capture”. ENEMO assesses that regardless of the accuracy of these accusations, which should be investigated by the respective authorities, they significantly and negatively affected the perception of the campaign and the integrity of the election process.”

Furthermore, he added: “Media reports indicated a number of physical incidents involving firearms and injuring several individuals, during the last week of the campaign, and in one case tragically leading to the murder of a local politician. ENEMO strongly condemns any form of violence, and raises alarming concerns regarding the negative consequences of such tragic events, when it comes to the environment of the campaign.”

ENEMO positively highlights the provisions and definitions in the Electoral Code aimed at preventing the misuse of state resources. Likewise, the State Election Commissioner (SEC) took a number of decisions related to possible abuse of state resources in the campaign and issued guidelines in that regard. However, issues related to political finance remain, such as risks of black funds and “shadow funding” of electoral campaigns, a lack of transparency pertaining to funding of political advertisement of “third-party“ pages on social media, and a lack of interim financial reports of electoral contestants before the election.

Mrs. Peytier stated: “This statement is preliminary in nature, pending the final count and announcement of results, and is based on ENEMO’s mission findings from 29 March to 25 April. Following this preliminary statement of findings and conclusions, the mission will continue following electoral developments, in addition to potential complaints and appeals after the Election Day. A final report including a complete assessment of the process and recommendations will be issued within sixty days from the certification of results”.

ENEMO’s International Election Observation Mission to Ukraine 2020 for Local Elections is financially supported by the National Endowment for Democracy (NED).

Statement of Preliminary Findings and Conclusions in English can be downloaded here: ENEMO25April2021Albaniaparliamentaryelections-StatementofPreliminaryFindingsandConclusions.pdf

Statement of Preliminary Findings and Conclusions in Albanian can be downloaded here: DeklarataENEMO_GjetjeveParaprakedhePerfundimeve26042021.pdf