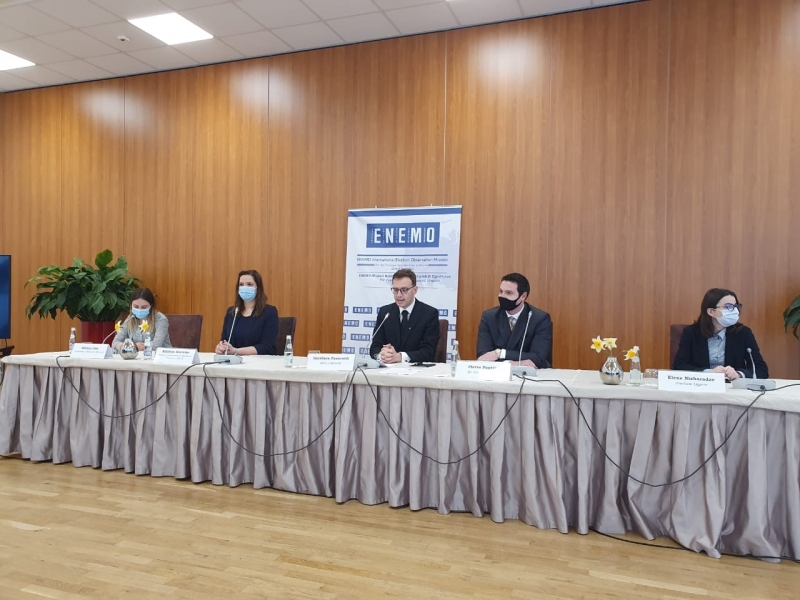 Tirana, 7 April, 2021 - The European Network of Election Monitoring Organizations (ENEMO) has accredited its team of international election experts for the upcoming Parliamentary Elections, which will be held on 25 April, 2021 in Albania. This was stated during the press conference held at Hotel Rogner Tirana.

The mission was accredited on 29 March, and consists of a Core Team based in Tirana.

Dr. Gianluca Passarelli, Head of the Mission stated: “ENEMO is an international network of civil society organizations, which has recently observed elections in other Balkan countries, including Serbia and Montenegro in 2020. ENEMO operates in full compliance with international standards for election observation. Objectivity, impartiality and reliability of the information collected by our experts are the top priorities of the mission”. He added: “ENEMO will observe, assess and report on key findings related to monitoring of the overall electoral process, including respect of fundamental human and democratic rights but also the conduct of election management bodies, campaigning by political parties and campaign finance, gender equity and rights of national minorities, electoral complaints and appeals, etc. The mission will conduct as many meetings as possible with key electoral stakeholders, including political parties, representatives of the government, electoral commissions, civil society organizations, media representatives, but also with representatives from the diplomatic corps and international community”.

The new electoral system recently approved by the Parliament of Albania and its first adoption in the 2021 elections will also give the chance to monitor the effects on voters, candidates, and MPs. ENEMO will pay great attention to the correct implementation of this electoral change.

In particular, in order to monitoring the fairness of the electoral process the ENEMO experts will be deployed in several polling station on the election day.

Additionally, he said that ENEMO is well aware of the difficulties of organizing elections in the context of the ongoing COVID-19 pandemic.

“Parliamentary elections in Albania are going to be held during the COVID-19 pandemic, which represents a significant challenge for all actors engaged in these elections. ENEMO hopes that all electoral stakeholders, including Albanian citizens, will respect all measures and contribute to holding these elections safely, Passarelli said.

Mr. Pierre Peytier, Deputy Head of the Mission announced that the mission will be in the country for a duration of approximately two months.

“ENEMO will assess the electoral process according to both international standards for democratic elections and the recently amended Electoral Code of Albania. We are confident that the mission will be very successful, in line with previous missions of ENEMO.”

Through monitoring and reporting on the crucial aspects of these elections, ENEMO’s mission aims to ensure the respect of free will of voters. Mr. Peytier, added: “All ENEMO reports and conclusions to be presented to the public will be evidence-based through our expert’s findings, which will focus on all crucial aspects of the electoral process. Our mission will issue a Statement of Preliminary Findings and Conclusions after the Election Day, as well as a final report at the end of the mission including a full assessment and recommendations for potential improvements”.

ENEMO’s International Election Observation Mission to the 25 April 2021 parliamentary elections in Albania is financially supported by the National Endowment for Democracy (NED).